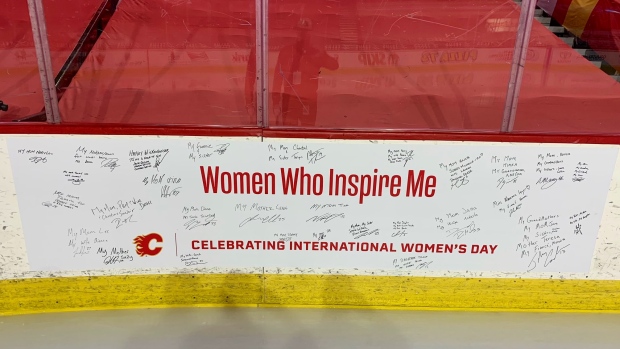 With International Women’s Day around the corner on Monday, the Calgary Flames took the opportunity to do something special for the women that inspire them.

Along a section of the boards, Flames players scrawled messages in honour of their female heroes before Sunday’s game against the Ottawa Senators. The messages are made out to women including family members, Hayley Wickenheiser, Christine Sinclair, Mother Teresa and more.

In advance of tonight’s game the @NHLFlames acknowledged women who inspire them!

It’s a nice gesture, and good on the Flames for taking the opportunity to do something even though they aren’t playing on International Women’s Day itself.

We’re sure that we’ll see more teams and athletes from around the sports world continue to show their appreciation on Monday.

We see you. We support you. We are proud of you.

Women and girls from all walks of life, we celebrate you! pic.twitter.com/Geln8Tup1o