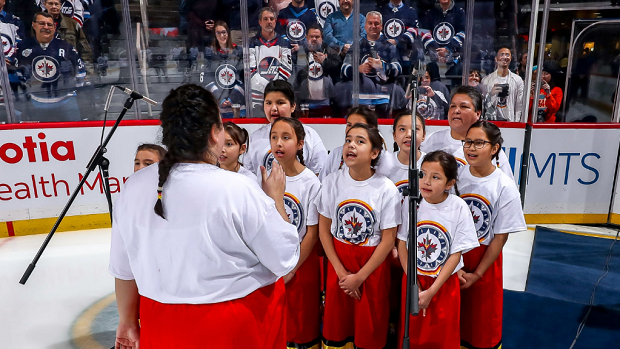 Breaking any sort of record in sports is always incredible.

There's just something about being the first to accomplish a feat that makes it all the more special.

Breaking glass ceilings? That just makes it even more special. Such was the case last night, ahead of the Jets game against the Lightning.

Strong Warrior Girls Anishinaabe Singers - a group comprised of singers between the ages of eight and 10 - made history by being the first to sing an anthem in Ojibwe ahead of a professional sports game.

It was an inspiring and powerful moment, and the girls performed beautifully.

For the first time at a professional sporting event, the Canadian national anthem was sung in Ojibwe ahead of tonight’s WASAC game! #HockeyIsForEveryone @wasacnews pic.twitter.com/ZWkYJ7tu74

The game also started with a ceremonial puck drop by leaders in the Indigenous community.

The representation in ahead of the game was amazing, and it was a real embodiment of the term 'Hockey is for everyone'.