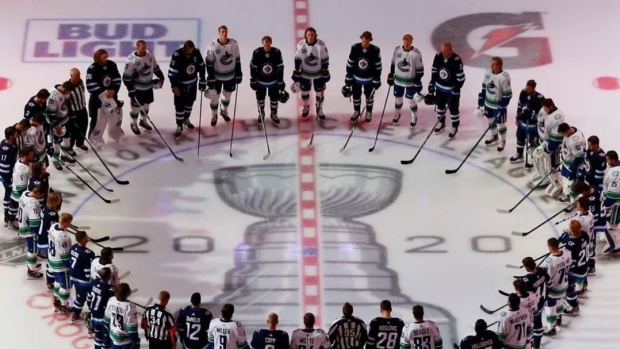 Because of the pandemic as well as the ongoing Black Lives Matter movement, there’s a much more significant social context in the backdrop of the games as hockey returns to play, and teams are finding their own ways to express support and solidarity.

Before their exhibition game on Wednesday, the Vancouver Canucks and the Winnipeg Jets stood together around the centre ice logo in support of frontline workers and against racism and hate.

The Canucks and the Jets stood together in solidarity in support of front line workers and social justice. . (📷: @nhljets)

We’ve seen a number of teams stand together and make similar gestures, although the Canucks and Jets took the unusual steps of standing around centre ice and also dedicating their gesture towards healthcare workers.

On the same day, the Minnesota Wild and Colorado Avalanche also stood together, with Nazem Kadri, Pierre-Edouard Bellemare, Matt Dumba and Jordan Greenway — the players of colour in the game — joining together more prominently.

The Wild and the Avalanche stood together in solidarity ahead of their exhibition game today. ••• 📸: @coloradoavalanche