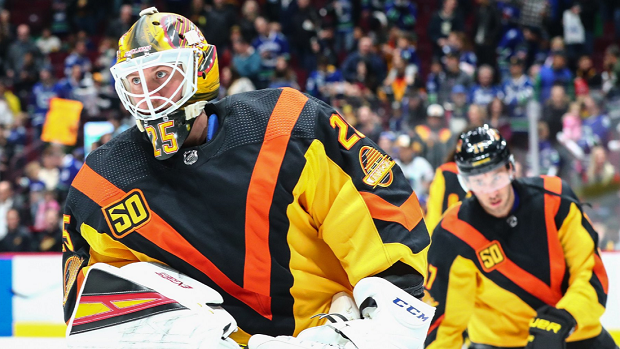 Jerseys are a simple thing, but they always cause a lot of stir.

Opinions on them are all personal, after all. Has there ever been a 100% collective agreement on whether hockey fans love or hate a jersey?

These Flying V jerseys the Canucks are wearing for their warm ups today are one of particular interest, because they always evoke strong feelings from fans.

They're either loved or hated, and there is absolutely no in between.

Beagle & Ferland are in, Demko starts & Marky has returned to Vancouver and will backup. All four will be in these ⚫️🟠🟡 beauties for warm-up!

Bid now on your Flying V jersey at https://t.co/hYYhmN7Jvu pic.twitter.com/JoEwpqQ0de

The jerseys are already available for auction in support of the Canucks for Kids fund, and they're a part of a whole bunch of neat 80s activations happening tonight, which includes free popcorn for fans who come rocking an 80s look.

Todayyyyy, we're gonna have ourselves a real goooood time!

Fans should be in for an awesome time for the Canucks tilt against the Sabres.