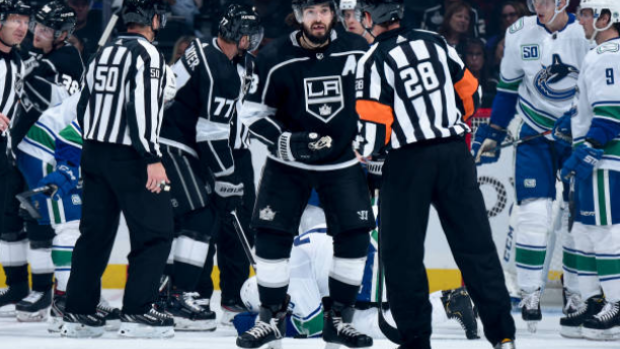 The Canucks marketing and social media team is staying woke on the hearsay around the NHL about their club.

After the Canucks thrashed Doughty and the Kings 8-2 back on October 10th, the defenceman referred to the loss as an embarrassing one and said “a team like that" should be beating them with that score.

Doughty not making any friends in Western Canada 😬

Kings defenseman Drew Doughty wasn’t holding back after 8-2 loss to the Canucks tonight: “It’s (expletive) just embarrassing. A team like that should not be beating a team like ours 8-2, there’s absolutely no way."

On Wedesday night, the Canucks handled the Kings again, winning 5-3 while pumping 49 shots on goal inside the Staples Center.

The Canucks decided to take Doughty's "team like that" quote and make it into a phone wallpaper. Then, the Carolina Hurricanes Twitter account mentioned that the saying would look great on a shirt, much like the "bunch of jerks" movement kickstarted by Don Cherry's comments slamming the team for their storm surges last year.

And wouldn't you know it, the team went through with it, putting the quote on a shirt that's being sold on the team store.

Following the win on Wednesday, TSN 1040's Jeff Paterson  essentially asked captain Bo Horvat if the club had heard the bulletin board material.

Reporter: "Did you guys get wind after the home opener of the comment Drew Doughty made?"@BoHorvat: "Absolutely." pic.twitter.com/hKwsTrO6Dr

“I think we’ve proven to him, and we’re going to continue to keep proving we’re a great hockey team."

Although the Kings are one of the basement dwellers in the NHL with the Canucks trending upwards, the two team were once fierce rivals back in 2012 after the Kings defeated them in five games on route to their first Stanley Cup in franchise history.

To everyone in Canada outside of BC, you're welcome.

Sitting second in the Pacific Division with a 8-3-1 record for 17 points, the Canucks have the best goal differential in the league, while the Kings are the third worst team in the NHL with just 7 points in 13 games.