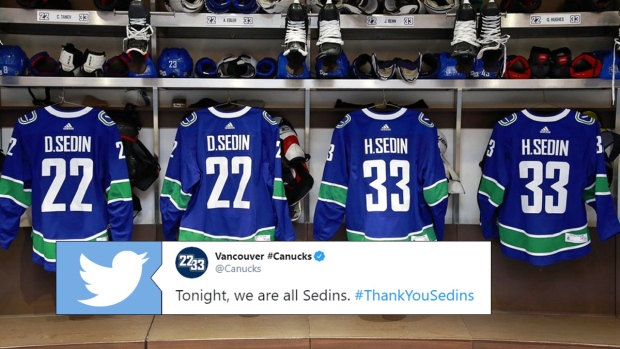 It’s going to be a special night in Vancouver on Wednesday as both Daniel and Henrik Sedin will see their numbers raised to the rafters, joining Stan Smyl, Markus Naslund, Trevor Linden and Pavel Bure.

For the pregame warm-ups, every player on the Canucks will take to the ice wearing either a No. 22 Daniel Sedin jersey or a No. 33 Henrik Sedin jersey.

The Canucks have dedicated the entire week to the Sedin twins, dubbing it Sedin Week in Vancouver, and they’ve got the arena all set for Wednesday night’s game.

The scene is set for Daniel and Henrik Sedin's jersey retirement night 👀 . (📸: @canucks)