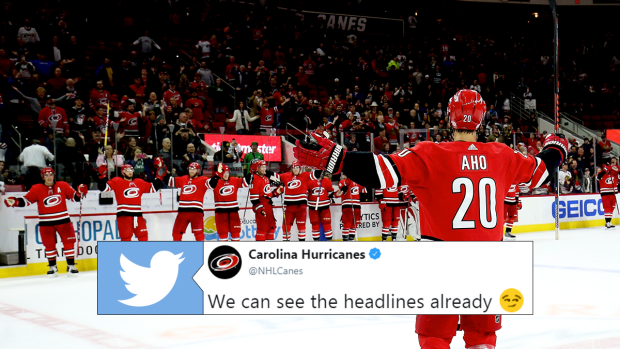 While Tom Dundon received a lot of criticism for his hands on approach early in Carolina, it seems to be working out for him.

The Hurricanes seem to have a totally different culture surrounding their team, having brought in some new faces after the owner promised there would be movement and implementing some fun new traditions. Of course, it helps a lot that the team is winning, but regardless of what they do, there will always be some hockey fans that don’t like the fun new approach they’re taking to the game.

It is a pretty simple addition, but hockey people really aren’t used to change.

The Hurricanes have started doing Viking claps after their wins along with other fun additions to the celebration. For example, Sebastian Aho led the most recent rendition on Monday night.

Another home win, another Storm Surge 🌊

After their win, they were already anticipating the reaction they would receive.

We can see the headlines already 😏 pic.twitter.com/IDOevkN8z2

Here at BarDown we follow the idea that no celebration can be too big. As Jose Bautista taught us in 2015, if you win, that’s all anyone will remember anyways. Although, you should probably practice you’re celebration a bit or you’ll end up confusing people like Rasmus Ristolainen did with his Selanne-like celebration.

And don't forget to celly. pic.twitter.com/rdW9Wwx8PE