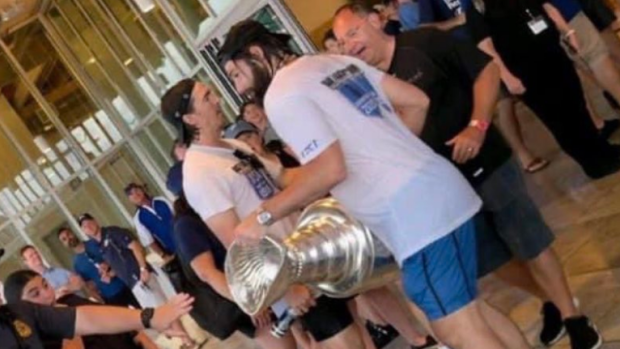 Pat Maroon with the Stanley Cup

Looks like the Stanley Cup had itself quite the parade, and may have even sustained a concussion along the way. A photo made the rounds around social media that appears to show extensive damage to the trophy, here’s how it came about:

As far back as we can trace the photo is to Twitter account “@BoltsJolts” who had apparently heard of some damage to the Cup. They posted a photo of Pat Maroon holding the Stanley Cup, with a massive dent flattening one side of the Cup’s bowl.

We reached out to BoltsJolts, who explained that they had taken a screengrab of a video on Facebook, but that they weren’t quite sure where it originated. With the flurry of content being shared around the Bolts parade, they couldn’t recall where exactly they saw the original video the screengrab came from.

We haven’t seen any other photo or video content around a damaged Cup beyond that one screengrab.

Saying that, it certainly looks valid, and the faces around it do look shocked. The Athletic’s Joe Smith also mentioned that the Cup received some damage, and that it would be flying back to Montreal (of all places) for repairs.

The ⁦@StanleyCup⁩ did sustain some damage during today’s festivities. It’ll be sent to Montreal for repairs and be back to resume Cup celebration with ⁦@TBLightning⁩ next weekend pic.twitter.com/MEbZGZFxSD

Of course, the Tampa triumph came at the expense of the Montreal Canadiens, who lost in a 5-game Final last week. Now, as the Bolts celebrate their back-to-back wins, the Cup will have to head out to Montreal for a week. Just not the way Habs fans had hoped…

The only way Montreal will get the cup! 🙄😂

Stanley Cup is in concussion protocol after taking an illegal hit to the head. Upon review DOPS has determined a fine of $5,000.00 will be assessed. 🤕😂

Works for me...let Montreal fix the Cup so they can at least see it for a bit because it won't be housed there for quite a long time

Montreal’s days with the cup will be spend repairing

It's coming home (for repairs) https://t.co/ZSACp0i7i5

Well…atleast Montreal can say it was in their city. Lmaooo https://t.co/KtGaFXYe6y

Montreal, this is your chance to make sure it never sees the sunbelt again. #stealstanley https://t.co/1mVu32b53X