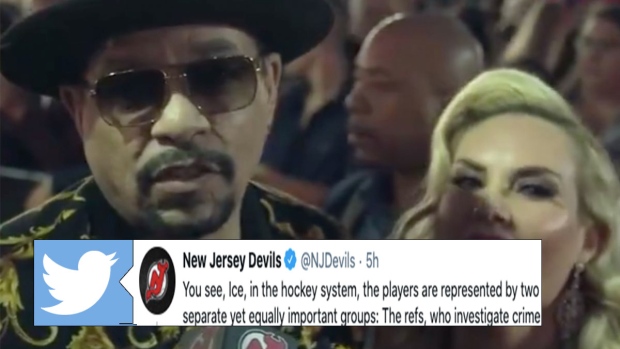 Because we’re hockey fans, we don’t think a whole lot about fighting in hockey.

It definitely doesn’t happen nearly as often as it used to, but we don’t really question it when it does.

Because we’re so close to it, we’ve never really considered how weird it is that hockey is really the only sport (outside of combat sports) where two players can fully fight and it’s considered pretty normal, and the repercussions aren’t terrible.

We realize, however, that if we weren’t avid hockey fans, this would probably seem pretty weird.

Who pointed this out to us? Ice-T, duh.

The entertainer took to Twitter to ask why hockey is the only sport where this still flies, and the New Jersey Devils had the perfect response.

You see, Ice, in the hockey system, the players are represented by two separate yet equally important groups: The refs, who investigate crime, and the players, who prosecute the offenders. These are their stories. https://t.co/vA1BHJBSpE

The Devils social game is absolutely A+ this year.