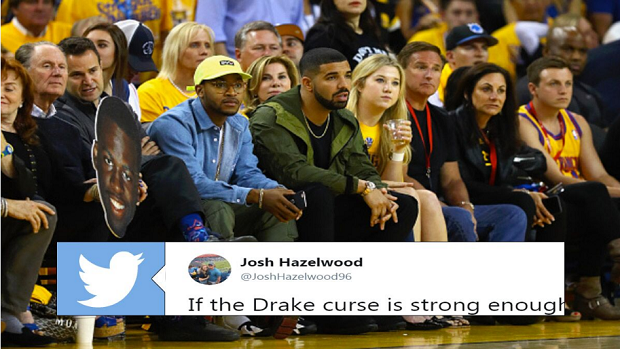 We wouldn’t consider ourselves a superstitious bunch.

In the wise words of Michael Scott, though, we are definitely a little stitious.

Which is why, as much as we love Drake, and as much as we shrugged it off most of the times that sports teams were faced with crushing losses all the times the Toronto-based rapper supported them, this time, we’re getting a little suspicious.

Ahead of the highly-anticipated matchup between Alabama and Clemson for this year’s National title, Drake showed his support for Bama, who were the favourite to win the Championship over the Tigers, but ended up getting thumped 44-16.

Get your mind right!
Motivation from - @Drake repping Bama!#OutworkYesterday#RollTide pic.twitter.com/Pv0nK6JEjt

.@Drake is rolling with Bama 👀 pic.twitter.com/2EOmJZn5Ll

Alabama fans, who are scrounging for a scapegoat following their team’s crushing loss to freshman Trevor Lawrence and his squad, have decided to blame Drake.

If the Drake curse is strong enough to get Alabama football, no one is safe.

Every team he wears loses #DrakeCurse

While we know there probably isn’t basis for this, and that the ‘One Dance’ singer probably isn’t cursed, fans have gathered some fairly convincing evidence that honestly has us considering the possibility.

And the curse of @Drake lives on..... once I seen he was with @TheNotoriousMMA for the weigh ins I knew Conor was in trouble..... didn’t I tell you @therealjohnjr pic.twitter.com/PmRCTi4C4b

“@Austynzogs: When Serena lost to Roberta Vinci, fans were quick to blame Drake, her boyfriend for the Drake Curse. pic.twitter.com/LpKKqqojKg”

THE DRAKE CURSE IS ON KENTUCKY DONT 4 GET 😂😂😂 pic.twitter.com/TpjLmCI863

McGregor, Serena, and Kentucky Basketball losing following Drake’s support could just be a sad coincidence, but Clemson was quick to troll Alabama about their newest fan when they held a comfortable lead in the fourth quarter.

Someone get this man a shirt with a Tiger Paw quick pic.twitter.com/VDx2dD7Iv4

We’re not sure this curse is for real, but we’re positive that it would have been super awkward if Bama had come back after that Tweet.