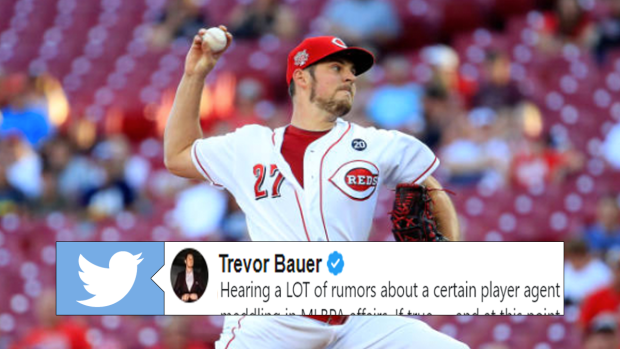 Toronto Blue Jays fans may remember Trevor Bauer as the Cleveland Indians pitcher that sliced his hand open while fixing his drone, leading to his forced removal from an NLCS start against the Jays because the cut just wouldn’t stay closed. It clearly became a problem when Bauer got his hands a little bloody, but that doesn’t mean he’s afraid to get his hands a little dirty these days.

Bauer has been mixing it up a lot these days, with a particular focus on shaming the Houston Astros as much as he possibly can since their cheating scandal surfaced. On Wednesday, though, it was someone else in the cross-hairs – MLB super agent Scott Boras.

Boras certainly isn’t shy when it comes to calling people out either, so it’s possible that Bauer just threw the first punch of what could potentially be a heavyweight bout.

Hearing a LOT of rumors about a certain player agent meddling in MLBPA affairs. If true — and at this point, these are only rumors — I have one thing to say... Scott Boras, rep your clients however you want to, but keep your damn personal agenda out of union business.

Bauer acknowledges that the shot comes from a rumour, but he’s certainly not afraid to call out Boras publically. Boras doesn’t belong in conversations to do with the MLBPA as he has a clear conflict of interest as an agent, so Bauer may have a point if true. Afterall, pretty much everything Boras says and does seems to have a bit of his personal agenda involved.

We have yet to hear from Boras, but it’s certainly not like him to stay quiet either.