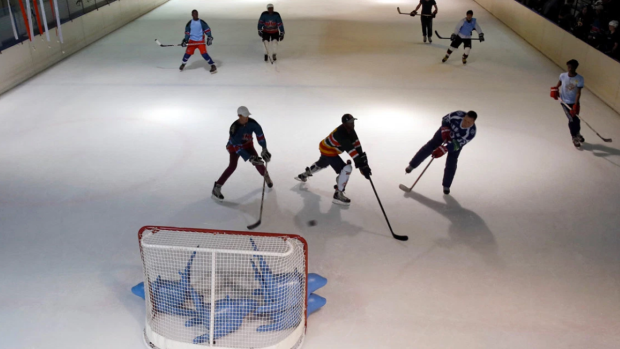 You won’t find many athletes from tropical areas nearby the Earth’s equator suiting up for the Winter Olympics, and when you do it is often because they have emigrated to a colder country, but every once in a while the Winter Olympics are treated to an athlete that hails from a country often under represented.

Kenya has had Winter Olympians before – Philip Boit competed in Cross-Country Skiing in 2002 and 2006, finishing 64th in the sprint race and 92nd in the 15 kilometre classic race respectively, while Alpine Skier Sabrina Simader will be representing the country this year in Pyeongchang. Meanwhile, the country is setting their sights on a once impossible dream of sending a whole hockey team to compete in the Games.

Following the building of Kenya’s only rink, the Solar Ice Rink in Nairobi in 2005, Kenyans (along with visitors from other countries) would take the ice once a week. While they told BBC back in 2016 that they it would be a dream come true to compete in the 2018 Winter Games, that did not end up happening. Now, they have their sights set on 2022.

One look at the team’s equipment and one would probably be able to tell that they still have a ways to go both in funding and in skill development, but they are confident that growing the game in Kenya will lead to more opportunities and possibly even international play.

The following is an excerpt taken from Mashable:

For years, Kenya Ice Hockey League organizer Bruce Strachan (an American with a “Canadian hockey-rich heritage” on his dad's side) found that recruitment of local ice hockey players was slow, in large part because of the cost of entry at the rink. It's about 800 shillings, or $8.00, which on a weekly basis is prohibitive for many young Kenyans.

But when the first in-line skater crossed over to try ice hockey a couple of years ago, some of his teammates expressed interest in checking it out. Last year, the rink’s Panari management agreed to sponsor three local players per league night, and the roller hockey guys started taking turns hitting the ice.

The rink is now teaching kids with the hope that more awareness and exposure will help to grow the sport more rapidly, but teacher Alex Kabwoya explains that the kids he’s teaching now have the facilities.

“I have small kids I’m teaching here who are good, really good,” he says.

While their dream of making the 2022 Olympics is probably a little far-fetched, the growth of a love for hockey in the Nairobi community is indicating that the international dream may not be as far off as one would expect.