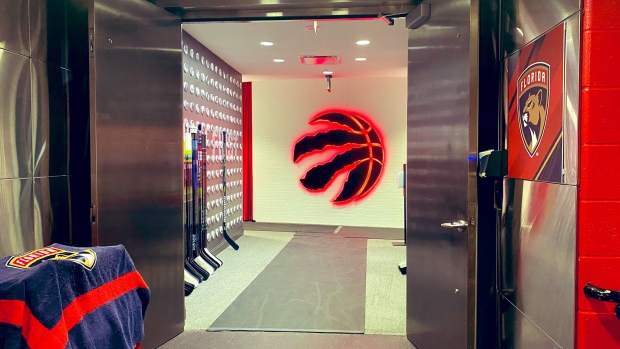 Unusual times call for unusual measures, and so the Florida Panthers have temporarily commandeered the Toronto Raptors’ locker room at Scotiabank Arena in Toronto for their first Qualifying Round game against the New York Islanders on Saturday.

Most of the Raptors imagery has been covered up, especially within the inner locker room itself, and it looks much more like a generic away team’s locker room. It would definitely have been weird if Jonathan Huberdeau had to change in a stall that said Kyle Lowry on it.

Ironically, the Raptors are playing near the Panthers’ hood too, albeit in the NBA’s Orlando bubble instead of Florida’s Miami home. It’s just one of those weird things about bringing a third of the NHL to Toronto that they have to share certain resources, including, yes, an NBA team’s locker room.

While they won’t be back at Scotiabank Arena for a while, the Raptors are still cheering on their locker room neighbours, the Toronto Maple Leafs, from afar.