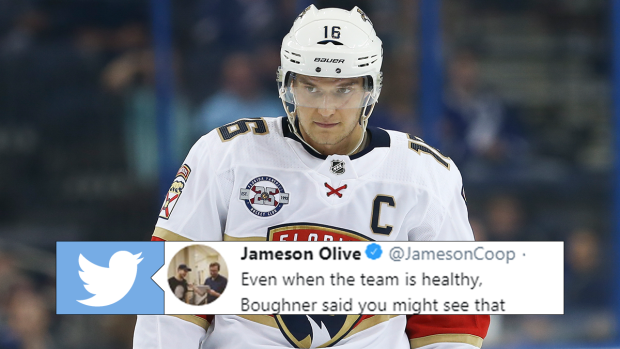 The Florida Panthers are a team that could benefit from some risk taking. They are a squad that seems to be perennially selected as the dark horses candidates of the year and some creative thinking could be what finally makes that come true.

The Panthers have been on and off again with their use of analytics (Ie. Getting Jonanthan Marchessault and Reilly Smith and then handing them to Vegas), so it’s hard to say what is really leading their decision making, but this could be an interesting on-ice change. For a while in the analytics community, fans and analysts have pointed out that in most cases, it is beneficial to play with four forwards and one defense.

Taking that one step further, it might even make sense to try five forwards on a powerplay. Teams have used the strategy infrequently in the past, but it sounds as if the Panthers might be willing to try it full-time.

Even when the team is healthy, Boughner said you might see that 5-forward power play unit again. They’ve been wanting to try it and liked the results tonight.

It just makes sense that if you are going to spend the majority of your time in the offensive zone, having your best scorers on the ice would make sense.

The Athletic’s Tyler Dellow has done a lot to explore four forward and one defenseman power plays, but he has pointed out a couple of other examples where the five forward strategy has been used. What seems like the best example is what Todd Nelson did for a long time in Grand Rapids.

Further to @CraigCustance's piece about Todd Nelson, most 5v4 AHL goals scored with a 5F0D since 2005-06. pic.twitter.com/zNyDWohK7H

Nelson is now an assistant coach with the Dallas Stars, so if the strategy has some success in Florida, maybe Nelson encourages it in Dallas and all of a sudden we have a new strategic trend in the NHL. It will be interesting to see how much they actually use the five-forward unit this season.