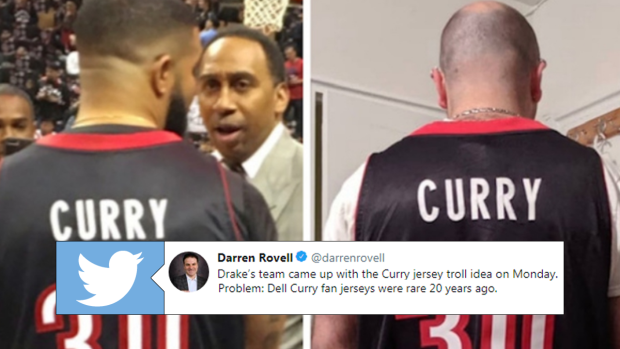 The Golden State Warriors were coming to town to play the Toronto Raptors in the NBA Finals. With Toronto making the Finals for the very first time in franchise history, it is certainly a pretty big deal around the city. As has been the case throughout playoffs, Drake had to make a splash.

And make a splash he did, with that splash aimed at one of the Splash Brothers himself.

Drake showed up to Game 1 of the series sporting an old school Toronto Raptors jersey bearing “Curry” on the back. It was the jersey of Warriors’ star guard Steph Curry’s dad Dell, who played a few seasons with the Raptors. It was even signed.

.@Drake is out here at Game 1 in a Dell Curry jersey 😂 #NBAFinals pic.twitter.com/BXIVY88TxH

Pretty expert troll job, sporting a Raps jersey of Curry’s actual dad. While some fans were worried about the infamous Drake curse taking effect, most just thought it was a funny way to try to get into Steph’s head.

This was a calculated move, so much so it involved a 10 hour road trip to obtain.

According to Darren Rovell, the jersey wasn’t just lying around Drake’s closet. After deciding that this is what he wanted to wear, Drake’s team reached out to Al Martiniello – a vintage sports clothing shop owner in Brooklyn. Martinello had worked with Drake before, and he took on the mission (despite receiving the phone call at around 1am) knowing how important it was to get the jersey.

Martinello didn’t have the jersey himself, unfortunately. Instead, he reached out to Evan Flores. It was Flores, who loved jerseys and had sourced them before, who finally managed to track down Benjamin Weil.

Weil owned a Dell Curry Raptors jersey that had actually be tailored to Dell himself, although it was never worn. As a bonus, it was signed by Dell – which added to the troll job even more. The only issue was, Weil didn’t want to part with it.

They finally found it, they finally obtained it, but the issue was they were still a 10-hour drive from Toronto. Not trusting priority shipping, they decided to drive it there themselves. Martinello and Flores hopped in a car, and made it in time for Drake to show up to the game.

The Drake Curse wasn’t a problem, the Raps went on to win Game 1 of the series for the first time this postseason. Maybe it’s because it cursed Steph’s Warriors instead. Who knows? All we know is we’re glad it happened. The Drake vs. the Warriors drama is already pretty high, and we’re only 48 minutes into the series.