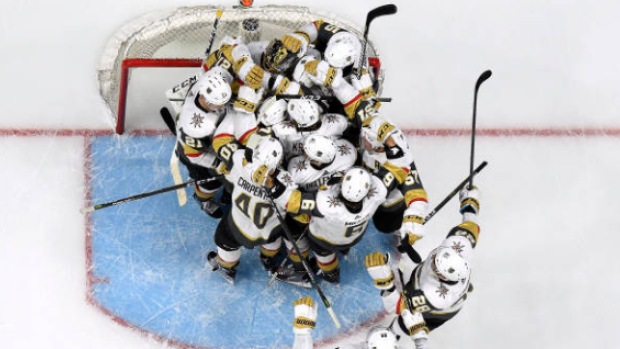 The Vegas Golden Knights made history on Tuesday night by becoming the first expansion team in NHL history to sweep a series clean. It was a much closer series than one would think when hearing the word "sweep," but is was the underdog Knights that came out on top.

The #GoldenKnights win their first-ever playoff series and sweep their way to the second round after beating the #Kings 1-0 in Game 4.

They’re only the second team in NHL history to earn a sweep in their first ever playoff series, and the third professional North American sports team to finish off a four-game in their inaugural playoff series.

Golden Knights are the 3rd team from the NHL, NBA and MLB to complete a four-game sweep to win their first-ever playoff series. The Penguins did so in 1970 (vs. Oakland Seals) and the MLB's Boston Braves did so in 1914 (vs. Philadelphia Athletics).

The Kings managed to match the Chicago Blackhawks whopping total of three goals scored in their Round 1 series against the Nashville Predators last season. Although the Golden Knights won series, they, too, were offensively strapped, pumping out just seven goals. That was mostly because of Jonathan Quick, who put together a herculean effort by standing tall in the Kings net.

Quick actually set the record for the highest ever save percentage by a goaltender with four losses in a post-season series, and it wasn’t even close at all.

Jonathan Quick (.947 SV%) finished with the highest combined save percentage in NHL history by a goalie through four losses in a playoff series. #NHLStats #StanleyCup pic.twitter.com/JhTnQLhNrg

The seven goals scored on Quick were the fewest ever allowed in a best-of-seven series.

Add this to the amazing @GoldenKnights story:

You gotta feel for Quick, considering he played his heart out, but his team just couldn’t put it together.

The three goals the Golden Knights scored made them only the sixth team in the last 38 years to ever allow three goals or less in a best-of-seven.

OTT also accomplished the feat, but did so during the 2002 Eastern Conference Quarterfinals vs. PHI - 2 GA in 5 GP. #NHLStats #StanleyCup

Vegas has caught on to the Golden Knights’ success by placing them at 4-1 odds to win the cup after starting the season at 200-1.

Oh, and they also have the best winning percentage in the history of the NHL. Let's see what Round 2 has in store for them.