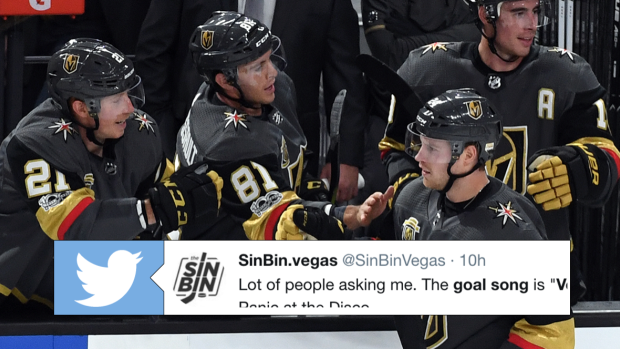 During the preseason, the Golden Knights debuted their first goal horn/song candidate, and it didn't get the reaction they were hoping for on Twitter.

(forgive our fans for their loudness:)) pic.twitter.com/qvJ9bOz127

The Golden Knights proceeded to ask fans for goal song suggestions and we gave them nine suggestions we thought would be good choices.

Every suggestion we gave had a connection to Vegas or the team's name, and as fans discovered Tuesday night, the Golden Knights went with a song about Vegas by a band from Vegas.

We suggested a different Panic! At The Disco song, but this one certainly works and based on the response the song got on Twitter, fans seem to agree.

DID MY DREAMS COME TRUE? THIS IS TOO PERFECT pic.twitter.com/I3PK27VTQ8

Vegas Lights for the @GoldenKnights goal song is too perfect. @PanicAtTheDisco

Lot of people asking me. The goal song is "Vegas Lights" by Vegas natives, Panic at the Disco.

If I had a say I’d pick “Don’t Threaten Me With A Good Time”. Nice choice, though. #PATD

Perfect choice. I’m so glad they went with something by a Vegas artist.

This is a fantastic choice on all accounts, if they go with it

As if I didn’t already love the @GoldenKnights enough, apparently their goal song is Vegas Lights by @PanicAtTheDisco . I stan forever 🙌🏻

Vegas Lights is truly the perfect goal song for Vegas.

Yes hello, I am in love with the @GoldenKnights because Vegas Lights by P!ATD is their goal song 💜🎉#VegasBorn pic.twitter.com/1mQrw4qHv4

Also, the fact that Vegas is using a 'Panic! At The Disco' jam for its goal song is really making me start to believe in this thing

The Golden Knights are using "Vegas Lights" by Panic! At The Disco as their goal song.#VegasStrong #VegasBorn