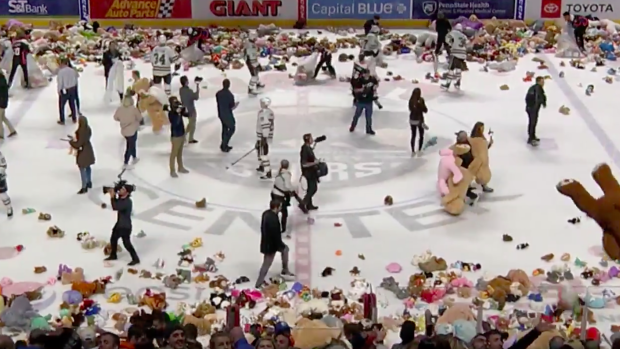 December is here, and that means all across hockey, teams are holding teddy bear toss nights to get fans in the giving spirit while taking in the game. To celebrate goals scored by the home team, fans throw teddy bears and other stuffed toys onto the ice, which are then gathered up as a donation to local charities.

Of course, nobody does it better than the AHL’s Hershey Bears. They broke the world record last year with 34,798 teddy bears and other stuffed animals thrown on the ice, and then this year, they broke their own record with a whopping 45,650 toys.

The moment we have all been waiting for. IT’S A NEW WORLD RECORD! THANK YOU! #TeddyBearTossHershey #HBH pic.twitter.com/D2ZFpj65WU

Who doesn’t love to throw foreign objects on the ice for a good cause, right?

Around the hockey world, fans were also making it rain teddies in support of the Calgary Hitmen, Kelowna Rockets, Medicine Hat Tigers, Kamloops Blazers and Wichita Thunder — among many other arenas, we’re sure.

Down they come for the @ENMAX Teddy Bear Toss!

It's a shower of stuffed animals! @kemp_2000 sends the teddy bears flying after scoring for @tigershockey tonight!

A Zary Christmas to all & to all a good night! Forward @ConnorZary scores this year's Teddy Bear Toss goal for @blazerhockey!

That was quick... 1-0 Thunder! THROW THOSE BEARS 🧸 pic.twitter.com/iHNivxTgq0