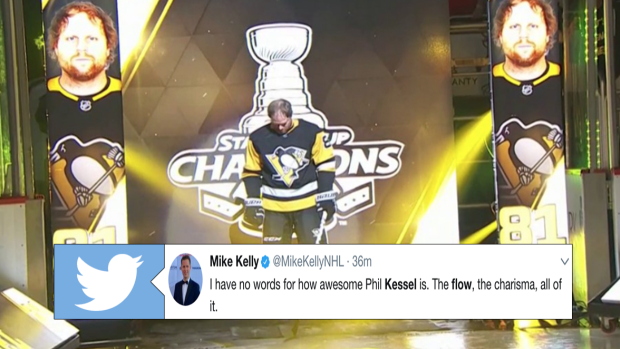 This summer has been the summer of Phil Kessel in more ways than one.

Not only did the former Leaf win his second Stanley Cup, but he also ate one of the best meals out of the Cup ever and his name showed up just about everywhere.

Plus, just days before the season, Kessel celebrated his 30th birthday.

Wednesday night, the Penguins opened the season against the Blues and they raised a banner for winning the Cup for the second straight season.

For every team's first home game, they introduce every player and when they introduced Kessel, fans couldn't help but notice how wonderful his flow is.

I have no words for how awesome Phil Kessel is. The flow, the charisma, all of it.

Kessel looks like he's right out of the beer league,AWESOME.

LOOK AT THAT JUICY LETTUCE pic.twitter.com/GJyzttVDA4

Why does Phil Kessel look like Ed Sheeran? pic.twitter.com/BAITxzwzmm

Phil Kessel is a National Treasure!

Kessel is a two-time Stanley Cup champion and he's now in the best flow in the show conversation.  How can you not like the man?

Asked Phil about letting his hair grow out. "I’m not going to answer that stupid question. Next one."

We can't help but wonder how the legend of Kessel will grow if the Penguins win their third straight Cup this season.