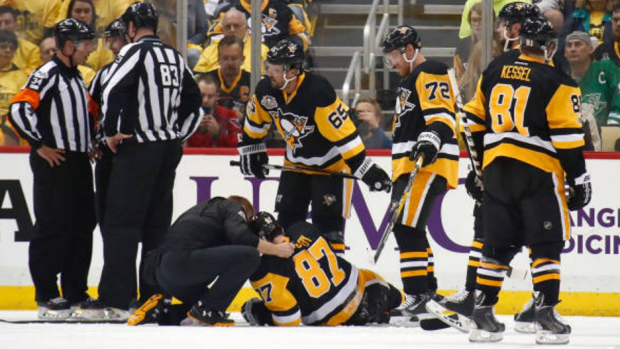 The hockey world didn't care about the final result in Pittsburgh Monday night.

Instead, everyone wanted to know Sidney Crosby's status after he took an ugly fall and cross-check to the head from Matt Niskanen.

On Tuesday, Mike Sullivan gave an update on Crosby's health:

BREAKING: #SidneyCrosby has a concussion and will miss Game 4. For more, visit TSN.ca.

Crosby's concussion history is well documented, and the pervious concussions make this one even scarier.

Upon hearing the news, the hockey world wished Crosby a speedy recovery:

Coach Sullivan: "Sid has been diagnosed with a concussion. He will be out for tomorrow's game. We will evaluate him from there." pic.twitter.com/9Gwph8UDPb

I hope Sid is okay! I hate to see one of the 3 best players in the game out due to a concussion! #Crosby1A #McDavid1B #Karlsson1C #GetWell87

Really, really hope this isn't a long absence for Crosby, who has treated hockey fans to a level of hockey unmatched over last 18 months

Biggest concern for me, however, is for Crosby the person, not the hockey player. Life after hockey. How much is too much? So much to ponder

Prayers for Sidney Crosby, the human being. At only 29 years old he's suffered far too many concussions & the NHL should be ashamed.

Despite a sizable segment of hockey fans with an irrational hatred of him, hockey's far better with a healthy Sidney Crosby involved.

Sullivan on Crosby: "He's very upbeat and optimistic. We're hoping to get him back in a timely fashion" -SK

The fact that Crosby’s leg didn’t break off and slide into the boards continues to astound me.

i don't care about crosby going back on the ice; i care about his brain working even if it means he doesn't go back

This is on the NHL first & foremost for creating an environment where toughness precedes player safety.

I'm sick for Crosby, the person.

Real tough news for Pens on Crosby. Hope it’s not long term. Good of the team to let fans know right away what’s going on, though.

i don't want crosby returning unless he's 110%. i don't care that it's the playoffs. his future and well being is more important than a cup.

Get well soon Sidney Crosby. Sorry you play in a #garageleague

It is so incredibly frustrating to see so many NHL fans applauding Crosby's injury.

Whatever you think of the Penguins or Crosby, it's gross to see people actively cheer on brain injuries.

I might not be the biggest Crosby fan but hearing he has another concussion feels bad man.

Sidney Crosby being out ruins the playoffs

Damn Crosby got a concussion. That sucks hope he gets better

To say I'm pissed is a understatement. I'm furious as hockey fan because Crosby has been giving the league some of the best hockey, ever.

I hate the pens, but seeing Crosby get his bell rung for the 162941 time is concerning on a human level. Seeing legends careers cut is shit

I've always been a Crosby fan, but recognize some aren't. Either way, hockey in infinitely better with him healthy than hurt. Special player

We wish Crosby a speedy recovery and hope he can make a return during these playoffs.  Hockey is better with Crosby on the ice.