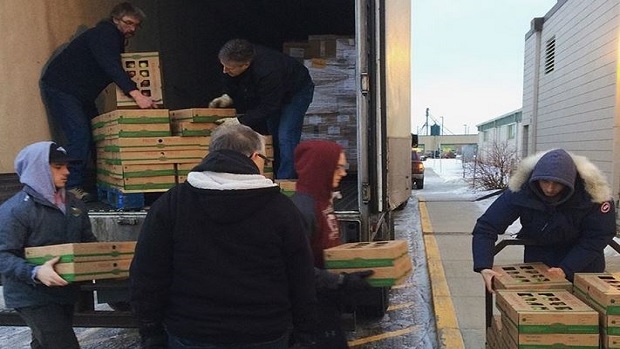 It’s been a really tough 48 hours for the city of Humboldt and the hockey community as a whole after the tragic incident that occurred Friday evening involving the Saskatchewan Junior Hockey League’s Humboldt Broncos. From the team logo being displayed in shop windows to residents walking around town in Broncos gear, the love and support for the hockey team in Humboldt is evident, and the organization’s love for the community and the residents is mutual.

From Broncos play-by-play commentator Tyler Bieber to the staff and players on the roster, the Broncos organization always made sure to put their community and the fans first and found different ways to remain active in the community all year round.

The Broncos spent their morning helping out the community by shovelling and plowing snow! Great work boys👍

All smiles this afternoon at the Elgar Petersen Arena as the Broncos helped tie skates for the St. Augustine school skate-a-thon. Also don’t forget, Monday the 19th is the Family Day game @ 3pm, followed by a skate with the Broncos!!

The Broncos volunteered to help unload a food truck early this morning for the Humboldt Band Association! Good work guys💪

From helping residents remove snow on snow days, to helping local youth learn how to skate, to donating food to local food banks, the guys were always focused on making their community better as a whole and their actions will never be forgotten by the locals who witnessed it all.

A huge thank you to everyone involved in having the Broncos out to the Cudworth rink and long term care home!! The guys had a great lunch and visit with all of the residents!

Thanks to the boys for coming out to help at Spring Camp this weekend! 🙌 #springcamp🏒🌷☀️

Today is the first day of Jumpstart month and #13, Dawson Atamanchuk was helping out in the dunk tank! #jumpstart

Today we had our first Diabeauty, Duke, at our home game vs Battleford!

Thanks to last nights Diabeauty, Jack and his family for coming out to the game last night!

A lot of junior teams across North America are very active in their community and unfortunately it doesn’t get a lot of coverage outside of their markets, but the Broncos show us all just how important these teams are to smaller communities across the nation.

An amazing turnout for the Broncos 1st Home Away from Home skate! The team was able to meet and skate with some of their fans from Watson and the surrounding area! Thank you to everyone who came out to support!

People have already filled the stairs outside the arena with flowers and gifts and a vigil will be held in honour of the Humboldt Broncos in Humboldt on Sunday night.