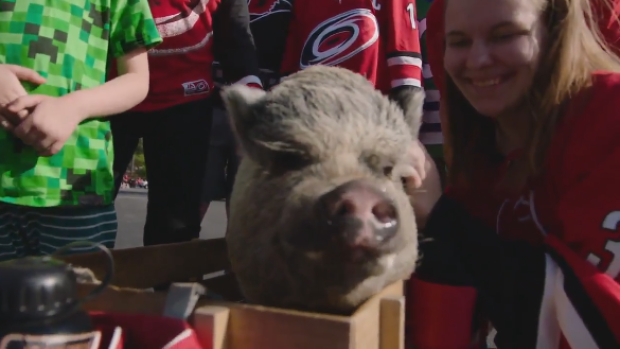 Hamilton the pig , Screenshot via Twitter/NHL

With no more Storm Surges on the forefront, a good-luck charm in the form of a pig is the latest viral trend to hit the Carolina Hurricanes.

Following the team's 5-0 win in Game 2 to get the team back in the series, Hamilton the Pig was counted on to bring his lucky ways back to PNC Arena on Thursday in Game 4.

Prior to puck drop, Hamilton and "Hamilton's dad," Kyle Eckenrode, brought his pet hog to the tailgate party outside the arena, where Hamilton became an instant hit with his fellow Caniacs.

It's snout a tailgate until Hamilton arrives! 🐷 #StanleyCup pic.twitter.com/X0dxiHgJtg

"This is great," said Eckenrode, to NHL.com reporter Tom Gulitti. "We bring him around and people get excited about seeing him and take a bunch of pictures of him."

Hamilton's good luck charm worked again, as the Hurricanes equalized the series at 2-2 with a gustsy 2-1 victory.

According to Gulitti, Eckenrode and his fiance adopted Hamilton in 2017 from a farm 97 miles southwest of Raleigh in Laurinburg, North Carolina.

The pig lives on their own small farm along with nine chickens just over a mile away from the arena. During 'Canes games, Eckenrode brings his 90-pound pet inside his house and allows him to sit on the couch so he can watch and cheer his favourite team on.

"He's great," Eckenrode said. "He sleeps inside. He likes to lay on the couch, so we put him on the couch when we watch the Canes games now and it's been our good luck charm."

The Hurricanes official mascot is a pig, and although there's no official team-connection between the two, Stormy and Hamilton share a special bond.

While it would make sense for the Eckenrode, whose brother owns seasons tickets, to name Hamilton after Dougie Hamilton, the name is purely coincedental.

"We call him Hammy. That's his nickname."

Hammy and Dougie Hamilton, soon to be united. Make it happen, Carolina!

The @NHLCanes have more Hamiltons in their corner than you might think. Meet the hog that doubles as the team's good luck charm (he's 2-0!) for the Stanley Cup Playoffs. @TomGulittiNHL has the story.https://t.co/XklvHeysNN