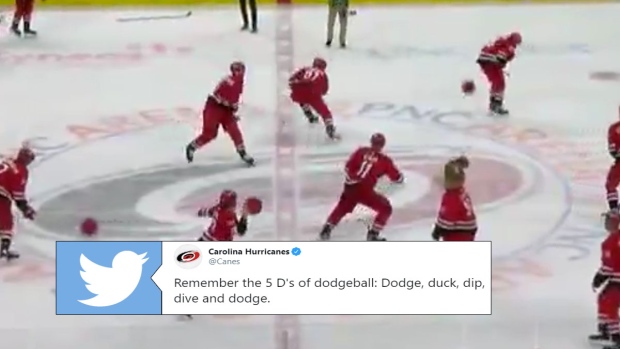 A lot of hockey fans thought last season was a lucky one for the Carolina Hurricanes as they shocked the entire hockey world by clinching a playoff spot, but through 50 games this season they’re showing their success wasn’t a fluke.

The thing that made the Canes a hit across the NHL last year wasn’t their play on the ice, though; it was their Storm Surges they busted out after their victories on home ice.

This season, they brought back the Storm Surge and they’ve added new celebrations to their ever-growing list, including a post-game dodgeball match following Tuesday’s win over the Winnipeg Jets.

Some guys had a little more fun than others, but who doesn’t love a good game of dodgeball?

Brock is having so much fun 😂 pic.twitter.com/wxr3RSosn4

Carolina defeated Winnipeg, 4-1, on Tuesday night to ride a two-game winning streak into the All-Star break, while the Jets have one more chance to head into the break on a high note as they’ll play the Columbus Blue Jackets on Wednesday night.