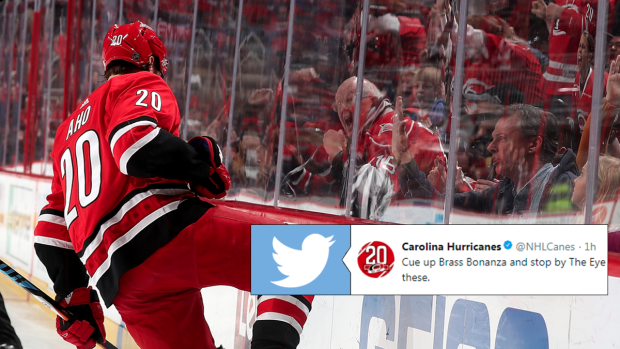 Ever since Tom Dundon became the majority owner of the Carolina Hurricanes, fans of the franchise have been on cloud nine.

From crazy ticket promotions, to an interesting seating plan, to embracing the franchise's roots by exploring the idea of wearing the classic Whalers logo. Dundon's seems to be saying and doing the right things, getting fans in Carolina revved up about their team again.

Thursday, the Canes took another step towards embracing Whalers history when they tweeted about the addition of a new shirt to the team store that features the throwback logo, and fans couldn't be more excited.

Cue up Brass Bonanza and stop by The Eye at tonight's game to pick up one of these. pic.twitter.com/zrrikDlfHY

Is this the Canes testing the waters on a possible rebrand? Or are the Canes simply selling Whalers gear because they know it will likely sell quite well. Who knows for now, but if you're a Canes fan, you have got to be pretty happy with their team's owner right now.