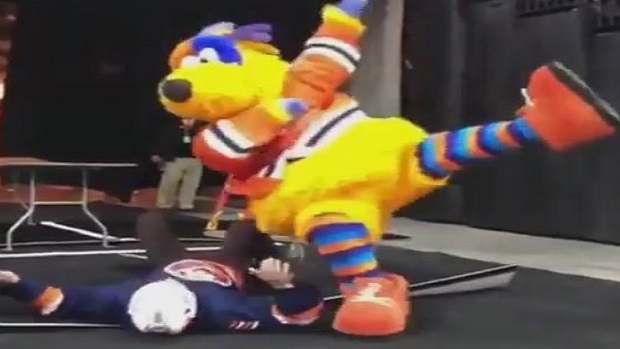 Each and every week, power rankings come out in every single sport for fans to debate over.  Who's ranked too high or too low dominates the conversation until the next week when updated rankings are released for fans to dissect and debate.

The @stlouisblues have taken over the top spot in the @7elevencanada #PowerRankings. . Thoughts?

Everything from players, to stadium food, to jerseys, to mascots have been power ranked at one point or another and they'll continue to be power ranked for a long, long time.

Speaking of mascots, they don't get their due in our opinion and we're here to give it to them each and every week.  This isn't an all-time sports mascot power ranking, no this is a weekly power ranking of the best mascots in sports.

Settling in to your favorite spot on the couch to watch the @Eagles game...#FlyEaglesFly pic.twitter.com/ALIZbftMDZ

Each week, we're going to highlight the best mascots from across the sports world.  They can be from the NHL, NBA, WNBA, MLB, NFL, MLS, WWE, MMA, NCAA, ATP, CFL, AHL, and even your local beer league.  It doesn't matter to us, as long as they're awesome and give us a reason to put them in the top ten.

In order to decide which mascots make the top ten, we, the BarDown team, deliberated and got into heated debates.  Eventually we came up with a formula more complex and secret than your grandmother's recipe for her most famous dish.

The inaugural BarDown Weekly Mascot Power Rankings are in and @lehighvalleyphantoms' #meLVin sits atop the standings. . . More at BarDown.

Seeing as it's the first week, though, we will say that this is a baseline ranking featuring some of our favourite mascots from around the sports world, regardless of what they've done lately.

Yes, T-Rac is a raccoon (the state animal of Tennessee), but he's the funniest looking raccoon we've ever seen.

Plus, he plays guitar and dances.  Find yourself a mascot that can do both.

Jason is fired up. pic.twitter.com/UEqPBFg22y

When you win, you move up, it's as simple as that and if our math is correct (which it obviously is), Jason is the most recent mascot to win a championship.  Take that Ralph The Dog.

Sooooo we've seen that some of you don't seem to like @ChanceNHL, our lovable Gila Monster mascot friend.

Chance the Gila Monster has dropped off just a little bit, but that happens during anyone's rookie season.

That said, Chance is doing everything possible to stay in the top ten and we recognize that.

May or may not have left @Blockaid1 a surprise #njdevils 😈🔥🤘 pic.twitter.com/tSVAucRMdd

We've got some big wrestling fans on the BarDown team, so whenever a mascot hits someone with a steel chair, they've got a spot on lock in the top ten.

The #NJDevils entered the first intermission with a 1-0 lead and...

The most consistent mascot in the business is by far Benny The Bull.  In NBA 2K18, his consistency rating would be 101, that's how good Benny has been for so many years.

Plus, Benny has been able to adapt and stay at the top which is incredible.

I did these things@rolopez42 was not harmed in the making of this film pic.twitter.com/r65ZTB426S

The Winter Wonderland in Ottawa this past weekend for the Grey Cup got us way too excited for December, but more importantly Christmas, and you can't have celebrate Christmas without a tree.

Plus, it's never too early to get your tree, so get on that!

You have a little brown on your beak Iceburgh. #kissup https://t.co/QD1y300TBK

Social media is so important in this day and age and there are few mascots who take a page out of Michael Scott's book and (boom) roast everyone.  Gnash is one of those mascots.

3. The Raptor, Toronto Raptors (No Movement)

Had a busy day today @raptors fans! First, I surprised this couple before they went to get married!! #weddingcrasher pic.twitter.com/ZOJwyK9j3L

The Benny The Bull of the North is the king of the court in our books and The Raptor won't deflate any time soon.

Jose Bautista and the Phillie Phanatic had some pregame fun. Caption our #MorningMeme! pic.twitter.com/JozdFSLnRX

Nobody is better at interacting with players and messing with them than the Phillie Phanatic.  You can go down an endless wormhole of the Phanatic's pranks (which we did recently) and enjoy every second of it.

#BahGawd what an elbow drop from the @lehighvalleyphantoms mascot! . (Video via @funwithmelvin)


If you're willing to put your body on the line like meLVin, then you're in the top spot.

We would like to file assault charges against the @LVPhantoms. This type of violence against the best fans in hockey will not be tolerated!

The champ is meLVin, but who's going to take the top spot? Find out next week!