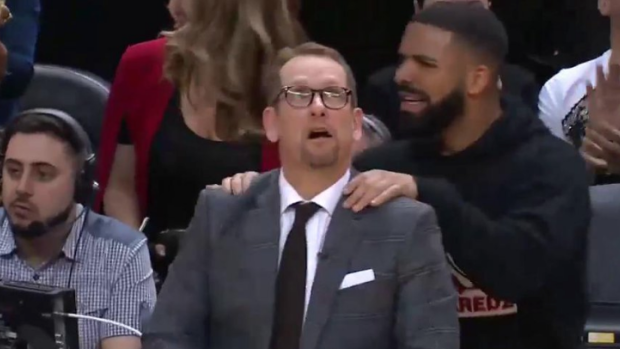 When Drake shows up to a Raptors game, something fun usually happens and that fact held true Tuesday night in Toronto.  Down 2-1 in the series, the

Raptors played their best game of the series to even things up and make it a best-of-three.
In the 4th quarter of the HUGE win, Drake and Nick Nurse shared a moment that immediately went viral and the internet absolutely loved it.

Everyone could use a hype man like Drake in their life, even Nurse.

Drake checking on Nick Nurse in the 4th 😂 pic.twitter.com/faxKPhypki

Drake is there with the shoulder rub Nick Nurse never knew he needed pic.twitter.com/usqo92LfPI

If I did what Drake just did at a Raptors game I would be tackled by no fewer than 14 people ...

Nick Nurse didn’t even notice. Time to just him as assistant coach/hype man and be done with it. pic.twitter.com/zDcTpOHzUu

Get you a hype man like Drake. 😂#WeTheNorth | #NBAPlayoffs pic.twitter.com/8X7pVo0Wvg

Would anyone deny a shoulder rub from Drake?  No chance in hell.

Nurse will have to win Game 5 without Drake in his corner as the series shifts back to Milwaukee, but it would be pretty cool to see Drake sitting on the sidelines much like Gucci Mane did for Game 3 in Toronto.

1st time in Canada 🇨🇦 it been fun already pic.twitter.com/avx67trrXA