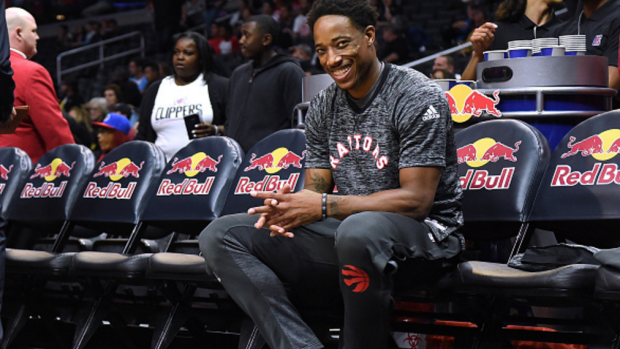 It's hard to believe that DeMar DeRozan has been a Toronto Raptor since 2009, but he has, and he's been with the team through the lows and the highs.

His loyalty to the city of Toronto is one of the things that fans love about him.  Add in the fact that the two-time All-Star is creeping into the superstar stratosphere and it's easy to see why he's so loved.

DeRozan, who was with the Raptors when Chris Bosh was in town, had a chance to make history Wednesday night against the Warriors, and in the second quarter, the Compton native passed Bosh to become the all-time leading scorer in franchise history.

As you could imagine, upon accomplishing the feat, the internet was quick to congratulate DeMar.

DeRozan told me last week he plans on texting his pal Chris Bosh after passing him, btw. Wouldn't surprise me if he heard from CB first.

Greatest Raptor of All-Time. Congrats to our very own, DeMar. https://t.co/grPVRUsUvI

Congrats to @DeMar_DeRozan on becoming the #Raptors all-time leading scorer... All he's done since he got here is do work #Boss #WeTheNorth

Congrats to DeMar Derozan! Met him for the first time at the '10 Midnight Run. Here's a pic I snapped at the event w/Tyreke Evans. So young! pic.twitter.com/2odpd9Nyq9

"I am Toronto. Outside of where I’m from, I represent this city harder than anybody"-Raptors ALL TIME LEADING SCORER DEMAR DEROZAN

Raptors guard DeMar DeRozan is the 4th active player to be his team's all-time leading scorer. He joins Dirk... https://t.co/Sv5rFBP3IJ