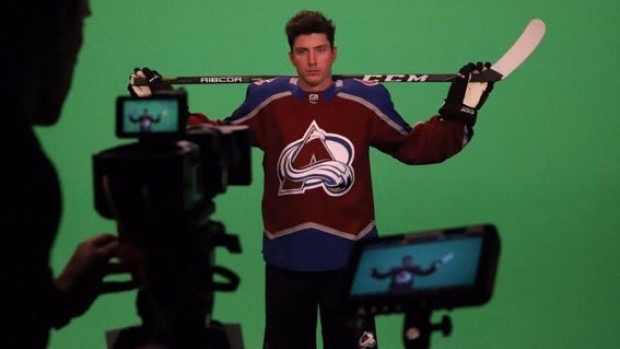 Colorado Avalanche forward Matt Duchene was rumored to be traded at last year’s deadline, but was never dealt. Then, the discussion shifted towards Duchene being a prime candidate to be moved during the off-season. Well, summer is essentially over and Duchene still is property of the Avs, despite rumors of the Canadiens, Predators, and Hurricanes all in the mix for the 26-year-old.

The Colorado Avalanche kicked off their training camp with the annual media component on Thursday, with Duchene present.

One of the first orders of business is for each team’s media team to do is to take photos of each player so their head and action shots can be featured inside programs, billboards, jumbortrons, websites and pretty much anywhere where hockey clubs will promote their players.

Duchene was no different than his teammates and had his picture taken on during media day. Maybe Duchene wasn’t feeling himself today or doesn’t like to smile for the camera, but by all accounts, he isn’t too pleased to be in Denver right now based photo that emerged.

Of course, the internet internetted.

This is not a hostage photo. This is Matt Duchene as an Av pic.twitter.com/47YTosCg0y

Matt Duchene looks so happy to be in Colorado pic.twitter.com/5wAYGrhCDV

The Duchene situation is bad for all sides. Hopefully it finds a quick resolution. In the meantime, I will practice my Photoshop skills. pic.twitter.com/d62vp8MELs

The Avalanche are coming off their worst season in franchise history with a paltry 48 points. Now, the team is waiting on the right return to deal Duchene away.

Colorado is a young team that has good, young talent like Nathan MacKinnon, Tyson Jost, and Mikko Rantanen, but needs to deal with the Duchene dilemma sooner, rather than later. The longer this saga plays out, the biggest the distraction it’ll become through camp and into the pre-season inside a dressing room that is coming off a horrid season. Good on Duchene for at least showing up to camp, as it could've made the situation even stickier.