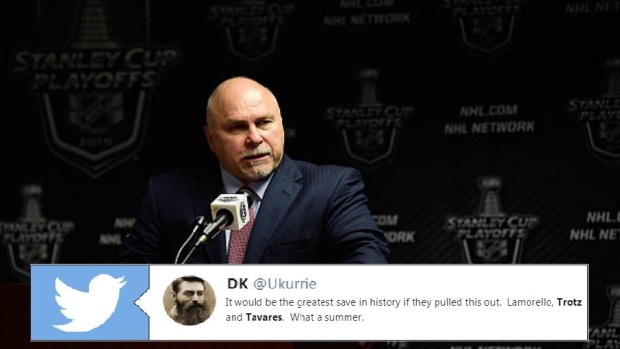 Fresh off a Stanley Cup victory, Barry Trotz has found himself a new bench to coach behind. According to Darren Dreger, the New York Islanders are taking on Trotz as their new bench boss. The move comes after the long anticipated firing of Garth Snow and Doug Weight, and also following the hiring of hockey management wiz Lou Lamoriello.

Following the hiring of Trotz, the internet instantly shifted its focus to another main storyline of the Isles offseason – what is going to happen with longtime Isles superstar John Tavares?

Many speculated that Lamoriello’s hiring boded well for the chances of resigning their best player, and Trotz has much of the similar reaction. It looks like people are more sold than ever a potential Tavares return to the island.

So, if what's being reported ends up getting done, in about a month, the Islanders will have added a team president/GM with three Stanley Cup rings (Lou Lamoriello) and coach with one (Barry Trotz).

That's a lot for John Tavares to feel good about in deciding if he'll stay.

INSTANT ANALYSIS: @DarrenDreger on how the Barry Trotz hiring by the #NYIslanders affects what happens with John Tavares https://t.co/8mDwufLB4k #TSNHockey pic.twitter.com/pyeHqXMwNy

#Isles not done after Tavares either... with Mitch Korn expected to join Barry Trotz on the Isles staff, will try their best to acquire Phillip Grubauer from the #Caps

If the Islanders end up hiring Barry Trotz AND re-sign John Tavares, then I quit being a hockey fan forever

This Trotz hiring isn't good for the "Tavares Leaving" group....I mean Trotz would only take this gig if he knew Tavares was leaning towards staying right?? (I'm not just saying this cuz of the #Leafs but for a Tavares move in general) #TSN #TSNHockey #TMLtalk

I bet this helps the push to retain Tavares. How much, I dunno. But playing for Trotz seems great. https://t.co/QNRDlBYjm6

Barry Trotz to the New York Islanders may be enough to keep John Tavares and Rick DiPietro on Long Island for 11 more years. (DiPietro will be)

#Isles fans today with the Trotz hire and Tavares next pic.twitter.com/7frvvd7SG4

Would have been surprised if Trotz went to NYI with any inkling Tavares was headed out of town. https://t.co/xsy5LwxpIZ

If Trotz is indeed hired by the Islanders, I fully believe Tavares stays there.

The only triple crown that will ever matter at Belmont if it happens #isles pic.twitter.com/DQOQsIia24

The Islanders are doing it! Arena>Lou>Trotz>Tavares? Not to mention a ROTY Award last night #letsgoislanders pic.twitter.com/4mS9GQ8pSA

“Isles have good news on Tavares and are closing in on Barry Trotz” pic.twitter.com/jTv7NVUMcX

It would be the greatest save in history if they pulled this out. Lamorello, Trotz and Tavares. What a summer.