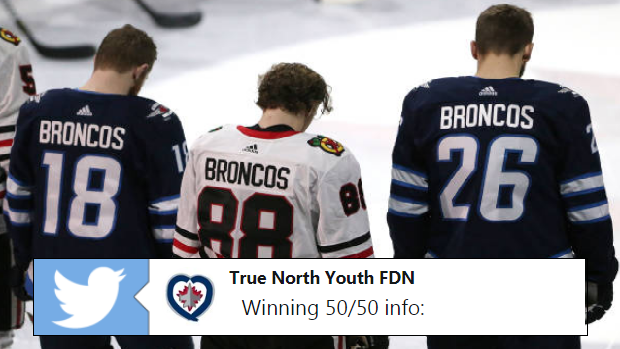 The city of Humboldt received devastating news yesterday that its Broncos of the Saskatchewan Junior Hockey League was involved in a fatal bus crash en route to a playoff game against the Nipawain Hawks. The accident took place on Highway 35 near the town of Gronlid. 15 people passed away while others are still in critical condition.

JUST IN: RCMP in Saskatchewan confirm that a 15th person has died as a result of injuries incurred during the Humboldt bus crash on Friday. pic.twitter.com/wFZdhNwWX2

The hockey community immediately took action, addressing the crash on social media and offering their support to the city. One of the closest NHL franchises to Humboldt wasted no time in making efforts to support the city. The Winnipeg Jets agreed to wear ‘Broncos’ nameplates on the back of their jerseys with the visiting Chicago Blackhawks and will be auctioning them off in support of the families. The franchise managed to raise its greatest sum of money tonight, though, through its 50/50 draw. The Jets announced they will be donating their half of the earnings to Humboldt and managed to raise more than $136,000 dollars.

We are so humbled by the incredible support of tonight's @NHLJets 50/50 draw. Tonight's proceeds will support the #HumboltBroncos community.

The teams joined together at center ice before the game in a special moment in front of a packed house at Bell MTS Place. It’s times like these when owners, management, coaches and players realize that today was about more than the game of hockey.

The @nhljets and @nhlblackhawks are honouring the #humboldtbroncos with nameplates on the back of their jerseys in tonight’s contest at Bell MTS Place 👏🏻 #prayforhumboldt. (H/T @nhljets, @nhlblackhawks)

A GoFundMe page was started and has raised more than $2.5 million. To make a donation, click here.