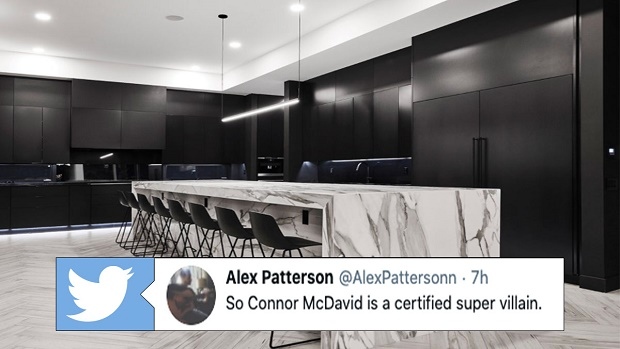 People are bored, there’s no hockey on, and everyone needs something entertaining to buzz about right now.

So when images of the home that Connor McDavid’s interior designer and girlfriend, Lauren Kyle, designed for the couple surfaced online, you knew it was going to gain traction fast. And when folks on Twitter decided that the house had major evil villain vibes? It blew up even quicker.

Connor McDavid’s luxurious, minimalist, and modern-themed home has been the talk of Hockey Twitter for a full 24 hours now, and some of the jokes about the place are outrageous.

connor mcdavid got a house with the most threatening aura known to man pic.twitter.com/TTq0BtuIK4

So Connor McDavid has almost certainly murdered someone right? https://t.co/xxTyz5SJip

I am by no means a design expert but the style seems a bit harsh. Like makes brutalism seem airy kind of harsh. Also has a distinct "this is where the head of the stormtroopers lives" feel. pic.twitter.com/Mc3aZzEaOB

If you think Connor McDavid's house is weird, wait until you see John Tavares' house pic.twitter.com/tCuQk3QHnm

me: i have no fear

me: i have one fear

Listen, we watch enough home improvement shows to know that dark neutrals, clean lines, and marble are all very in right now, but that’s not the major takeaway from this Twitter debacle.

What is the major takeaway, then? People are talking about his house enough to prove that we need hockey back, like, yesterday.