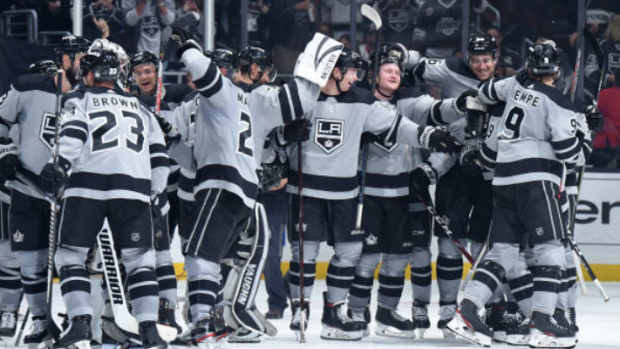 Ask any hockey coach and they'll have some pretty strange hockey drills up their sleeves.

Sometimes the best way to change things up in practice when your team isn't doing so hot is to inject a little fun.

For the Los Angeles Kings, winners of one game over their last six games, head coach Todd McLellan decided to mix things up at practice on Wednesday.

That text above translates to the following, via Twitter translate:

The training session ⁦LAKings starts with a kind of simulated match, in Kanata. Three teams, two pucks, two nets. Everyone plays at the same time. Never seen anything like it (in the NHL) before. Interesting.

You can just imagine how limited the ice is with that many bodies in one confined area.

The drill is beneficial because it forces players to make quicker decisions with guys pressing in. Less area to work with means the puck has to essentially be on and off your stick, otherwise, you're getting smothered. It also does increase the chance of a collision,  so the Kings better keep their heads up.

And what about the goaltender? Two pucks to watch out for with three teams buzzing around? My goodness.