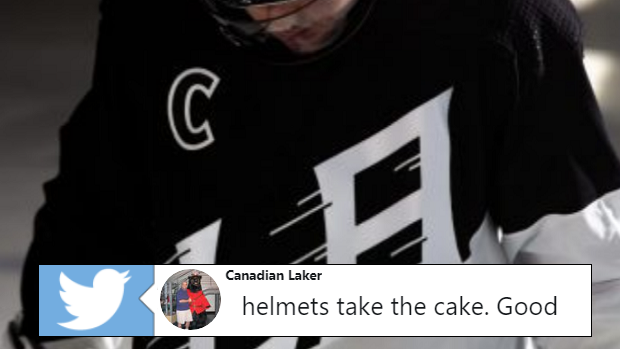 The LA Kings are going to be looking pretty shiny when they take on the Colorado Avalanche outdoors on February 15th.

The team released their Stadium Series uniform (set to be played at the United States Air Force Academy) and there’s one glaring part from it (literally) that quickly catches the eye. The uniforms have a bit of an old school look to it but the helmets.. the helmets! They’re shinier than a set of rims on a brand new convertible. No team colours, just a chrome dome.

The L.A. Kings have unveiled their Stadium Series jerseys. Thoughts? 🤔

Shiny helmets? The army badge for the helmet stickers? Yeah, these are awesome. The helmet received plenty of love from hockey fans:

Behind the Scenes: Creation of the LA Kings 2020 Outdoor Jersey

Overall, I would give it a 7/10. The helmet and gloves help to tie the uniform together because the jersey alone is about a 5.5/10.#GoKingsGo

The Kings and Avalanche #StadiumSeries jerseys are different lol. But that’s what this outdoor game is all about. I like the Avs jerseys more than the Kings but I actually like the chrome helmets LA will use. Not bad. #HockeyTwitter

The #LAKings #StadiumSeries Jersey looks much better than the @Avalanche Jersey that's for sure. The #ColoradoAvalanche jersey is the worst I've ever seen. #Kings Helmet is dope I wish the Gloves matched but the Jersey isn't bad I like it #TeamAdidas #AdidasHockey #GoKingsGo #NHL

The Avalanche uniforms on the other hand… drew some mixed feelings. We haven’t seen the helmets yet but the jerseys are pretty unique.

So… A) which jersey do you like more and B) what’re your thoughts on the helmet?