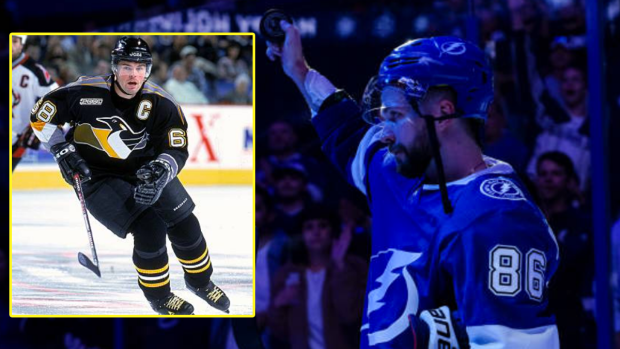 Would you believe us if we told you Nikita Kucherov actually began the season with TWO WHOLE GAMES not recording a point?!

Yeah, you probably would. Lots of players would fall under that umbrella. It may be a little more surprising once you find out that Kuch is closer to a two point-per-game pace than one, and that only 9 of his 43 games have been pointless.

It’s pretty rare to keep the Russian off the stat sheet. In fact, the first half of his season has been so dominant, it’s been nearly 20 years since a player has matched it.

Prior to Kucherov, the fewest team games required by a @TBLightning player to hit 70 points was 53 (Martin St. Louis in 2006-07). pic.twitter.com/jQPvFJgY7i

Anytime your name is getting lumped into the same category as Czech legend Jaromir Jagr, you know you’re doing something right. In fact, if you take it one step further and only look at assists, those names get even more prestigious:

Nikita Kucherov is the 10th different player in NHL history to accumulate 50 assists within his team's first 43 games of a season.

This is the first such occurrence since 1995-96 when Wayne Gretzky, Mario Lemieux, Jaromir Jagr and Ron Francis all did so. #NHLStats pic.twitter.com/UDB3gLfxMx

Gretzky, Lemieux, Jagr, and Francis. What a group.

At his current 1.63 point-per-game pace, Kucherov would finish the season with a ridiculous 133 points. That would be the most points in a season since Mario Lemieux won the Art Ross in 1995-96 with 161 points.