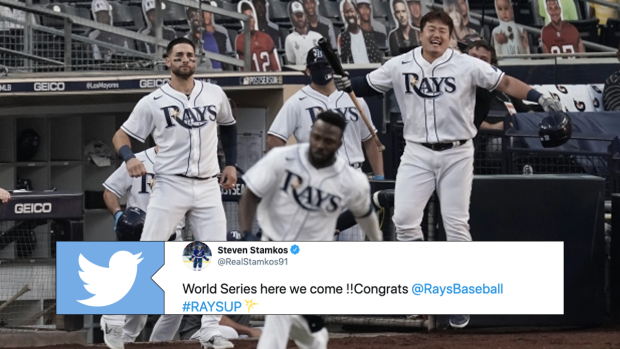 Around this time a month ago, the Tampa Bay Lightning were just getting underway against the Dallas Stars with the Stanley Cup on the line.

Now, the Lightning are Stanley Cup champions, and they’re watching as the Rays are on the verge of capturing the World Series title over in the MLB after eliminating the Houston Astros in Game 7.

The Rays send the Astros home and claim their berth in the World Series!

While other cities have won multiple major sports championships in the same year, this year’s unusual sports schedule gives us the strange circumstance of having the NHL and MLB playoffs end just a month apart from each other. (Would’ve been neat too if Tampa Bay had an NBA team vying for the Larry OB, wouldn’t it? At least Miami is in the same state.)

With a chance to bring a second title to Tampa Bay, Lightning players are throwing their support behind the Rays, who will take on the winner of Sunday’s Game 7 between the Atlanta Braves and Los Angeles Dodgers.

(We’ll just note, too, that after taking care of the deeply unpopular Astros, the Rays might just have the highest approval rating of any team in baseball right now.)