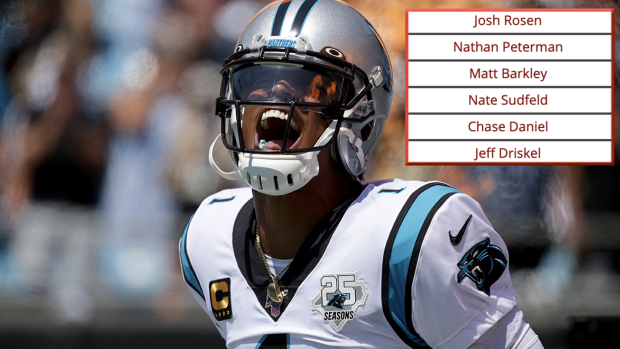 Sunday night, Cam Newton signed a one-year contract with the New England Patriots and while the salary for the deal is still unknown, it's been widely speculated that's a "minimum contract" filled with performance-based incentives that could earn Cam $7.5 million if he hits certain marks over the course of the season.

Source: The #Patriots are signing Cam Newton to a 1-year deal. A chance to compete. This has been in the works. A bare minimum deal.

Now, "bare minimum deal" could mean a lot of things, but for the purpose of this article, let's say it's something similar to what Ryan Tannehill got last year before signing his mega deal with the Titans this summer.

Tannehill’s deal w/ the #Titans last year was a 1 year $2M base contract with $4M of additional incentives. He earned almost $5.5M from it. Cam’s deal will follow suit, maxing out at $7.5M.

We're talking between $1 and $2 million for the former MVP of the entire league in 2015.  Ludicrous, right?  And of course the Patriots are the team to make the deal because they wouldn't be the Patriots if they didn't.

We'll save our New England rant for another day.  Back to the task at hand, finding out how many quarterbacks are making more than Cam this season.  So, let's say it's the Tannehill deal and Newton has a $2 million base salary, but doesn't hit any incentives for the season.  That would put over 40 quarterbacks ahead of Cam when comparing salaries.  He would be on par with Jeff Driskel and Chase Daniel at $2 million.

If we were to lower Newton's base salary to $1 million (there's a very real possibility that's the actual number), minus the incentives, the number goes up to 56 QBs ahead of Cam.  And finally, if we were to assume Cam hits the incentives and earns the reported $7.5 million for doing so, that number is still 24 quarterbacks making more in 2020.

How many former League MVPs have had to sign for the min? (Asking for a friend.) just ridiculous. A transcendent talent and less talented QBs are getting 15/16m a year. Disgusting https://t.co/eZycGL8qkZ

The numbers certainly support Sherman's point.  We don't doubt Newton will make more because of the incentives and New England will once again reap the benefits of such a cheap contract.  Good luck rest of the NFL.

And then there’s this from inside the AFC East: pic.twitter.com/4p5mktVPOx