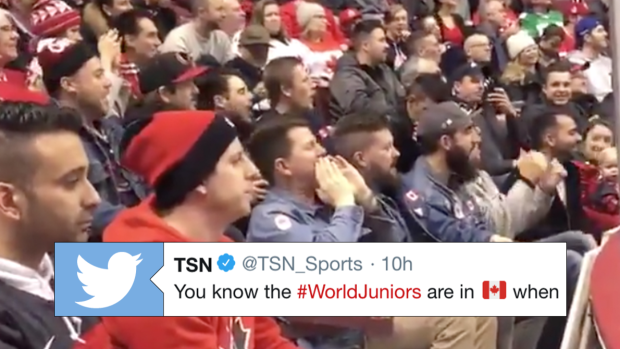 It's the most wonderful time of the year because the World Juniors are officially underway and on Wednesday night, Team Canada gave fans a ton to cheer about as they scored 14 goals against Denmark in a victory.

🇨🇦 opens up the #WorldJuniors with a massive 14-0 victory over 🇩🇰! #REPRESENT

Fans were on their feet and cheering for every goal, but at one point a unique and very Canadian chant broke out that we know you'll appreciate.

You know the #WorldJuniors are in 🇨🇦 when a “maple syrup” chant breaks out! 🍁🍁🍁

Will the "Maple Syrup" chant catch on in a similar fashion to Canada's goal song last year?  We certainly hope so because by the looks of it, fans aren't thrilled with the song choice this time around.

BREAKING: "Don't Stop the Party" by @pitbull will serve as Team 🇨🇦's goal song at this year's #WorldJuniors