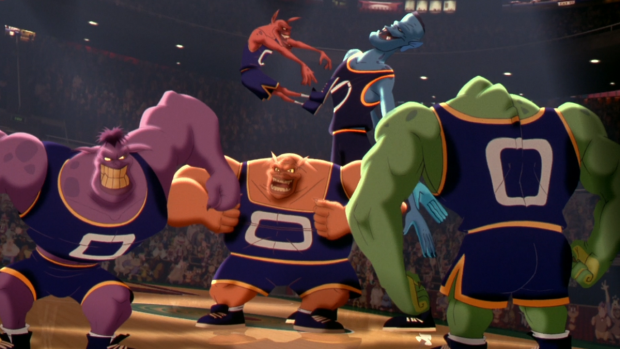 In the original Space Jam, the Monstars wore mostly nondescript jerseys against the Tune Squad. Their jerseys didn’t even have a logo! They were navy blue with yellow stripes, and the only thing on them was the jersey number ‘0.’ Yes, all the Monstars wore No. 0.

This time, they’re getting fitted by Nike. The new Monstars jerseys feature, first of all, an actual logo, and then also a galaxy print jersey number that actually looks pretty cool. No word yet on how the Monstars will end up signing an apparel sponsorship deal with Nike in-film, but, hey, this is an aesthetic upgrade over 1996.

The Tune Squad jersey mostly remains the same, because why mess with a classic, right?

The new Space Jam jerseys have been revealed 👀 . (📸: @sneakercenter)

Space Jam 2 is set to release on July 16, 2021. The film stars LeBron James, and a wide range of NBA and WNBA players including Anthony Davis, Klay Thompson and Diana Taurasi will also make appearances.

While the movie is still over a year away from hitting theatres, that doesn’t mean that the hype is slowing down any time soon. LeBron is even going to wear a pair of custom Space Jam sneakers at All-Star Weekend this year.

Double the @kingjames for All-Star Weekend 👑👑