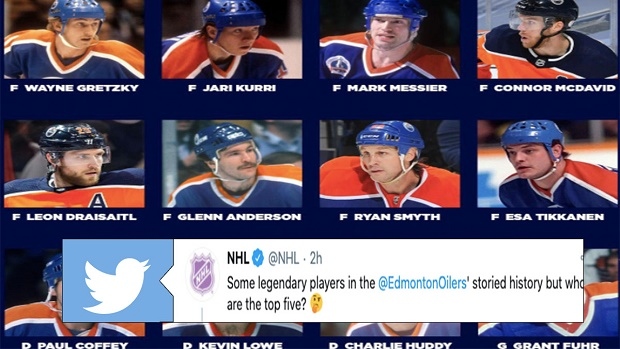 The GOAT debate: it’s an absolutely endless one.

The greatest of all time debate is always controversial, no matter the topic. When sports are involved? All bets are off. Who’s the best NBA player of all time? The greatest quarterback? Best baseball player?  If you asked five different people these questions, you’d probably get different answers from all of them.

It’s the same thing with hockey. Who’s the greatest player of all time? We don’t even like to get into this debate a lot of the time because there’s so many ways the conversation could go depending on a lot of factors, but today, Oilers fans definitely got into it.

The NHL took to Twitter to try and compile a list of the greatest Edmonton Oilers of all-time, and based on how much talent has graced that team, you probably could have guessed there was going to be some ruffled feathers.

The issue was mostly generational, with some people thinking Connor McDavid has already proven himself as a top five player in Oiler history, while others insist he’s too young and has yet to solidify his place.

Some legendary players in the @EdmontonOilers' storied history but who are the top five? 🤔 pic.twitter.com/HpOEHes5mL

Anyone who puts McDavid on this list was born in the 2000s and just don’t know better.

Not really. Mcdavid has proven that he belongs in same category as these players.

Agreed. McDavid will eventually bump kurri or fuhr once he brings success to the team at the level these guys did.

‘McDavid’ is trending on Twitter right now, so you know this debate is going to go on for a bit. Is McDavid in your top five? Let us know what you think @BarDown!