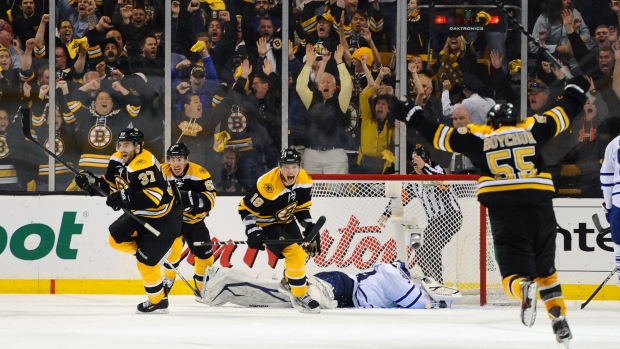 We're sure that Toronto Maple Leafs fans are excited to relive this one.

The Bruins' unforgettable comeback in Game 7 of the 2013 playoffs, storming back from a 4-1 deficit to win 5-4 in overtime, was named by the NHL as their Game of the Decade.

The NHL has named Game 7 of the Eastern Conference First Round between the Bruins and Maple Leafs on May 13, 2013 as Game of the Decade: https://t.co/qPCFwxASnk

The decision was made by a panel of NHL.com writers, describing the game as “one of the most improbable comebacks in Stanley Cup Playoff history.” Those Bruins couldn’t go all the way and win the Stanley Cup, but they came close, losing in Game 6 of the Stanley Cup Final to the Chicago Blackhawks.

This particular loss has been an especially bitter one among Leafs fans for years, but at the same time it was one of the most incredible dramatic experiences in hockey over the past decade. In the replies, fans named a couple other strong contenders for game of the decade.

I don’t think Game 7 between Chicago and LA in 2014 gets enough recognition. That game was great.

Canucks Blackhawks game 7 round 1 in 2011 was one of the fastest, toughest, most skilled games ever. Reigning cup champs vs. Presidents trophy winner. Leafs were a middling team. #rethink

Game 7 ECF Tampa Bay vs Boston. 0 penalties called in game and was a 1-0 final. That game was edge of your seat for the full 60.

An interesting game, definitely, but my pick is Hawks-Kings Game 7 in 2014. That series is still the greatest of the salary cap era, and was essentially for the Stanley Cup