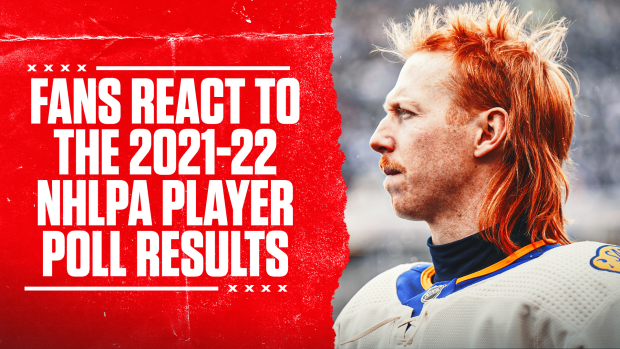 Each year, the NHLPA adds an extra little activity that never fails to draw interest. They ask over 500 NHL players to submit answers to a 15-question survey, and then they anonymously post the results for hockey fans to analyze.

On Wednesday, the NHLPA released the 2021-22 results. Fans – as you would expect – had opinions.

1. Goaltender you want with the game on the line – Andrei Vasilevskiy

One game on the line?

There is only one Andrei Vasilevskiy – and the players voted the @TBLightning netminder as the one they would most want in net! #NHLPAPlayerPoll pic.twitter.com/c29W4Txvf4

Fan reaction: This one is generally agreed upon by most. While some are beginning to toot the horn for Igor Shesterkin, Vasilevskiy’s ability to come through in the clutch is unmatched.

Has anyone won more meaningful games than Vasilevskiy in the last 4-5 years?

Your damn right! The best goalie in the world! #GoBolts #BigCat

Shut outs every team facing elimination it’s a no brainer

2. Player you want on your team in a must-win game – Connor McDavid

With five 100-point seasons and extraordinary abilities that few opponents enjoy facing, you know why @cmcdavid97 (@EdmontonOilers) was voted the skater NHLPA members would most want on their side with one game on the line. #NHLPAPlayerPoll pic.twitter.com/W5J8EYLmW8

Fan reaction: Nobody denies Connor McDavid’s brilliance, but some fans brought up the point that he has not had much success in playoffs. Additionally, other fans thought Hart candidate Auston Matthews’ being omitted from the Top 5 was wrong. Other fans decided not to overthink it, and simply agreed with the McDavid win.

If it's a playoff game, I'm certainly not taking McDavid.

Reminds me of how I felt about the really good kids I played hockey with. You pass me that puck....and it's coming right back.

Listen man....coach doesn't want me touching the puck with you out here haha. I'm just in the way. Just go skate by everyone!

A master of cradling the puck, @88PKane (@NHLBlackhawks) has been named the league's best stick-handler in consecutive seasons by the players! #NHLPAPlayerPoll pic.twitter.com/xutPdi4rkJ

Fan reaction: Fans generally don’t mind this pick. Kaner’s mitts are nasty! There were a few other mentions from befuddled fans.

Panarin not on this board is insanity

He reached the 50-goal mark again this season, but he knows when to pass the puck, too.

Leon Draisaitl (@EdmontonOilers) moved into first in this season’s #NHLPAPlayerPoll as the game’s best passer! pic.twitter.com/mNqOqGFnnn

Fan reaction: First BIG discrepancy of the polls. While Drai’s talent is undeniable, fans believe there were a few omissions from the list. Maybe more than a few…

Ever heard of Robert Thomas?

If his trophy case wasn’t evidence enough of his game, Sidney Crosby (@penguins) earned top spot in the #NHLPAPlayerPoll as the most complete player. pic.twitter.com/yB1BvP7K1F

Fan Reaction: A lot of people agreeing with the pick, but some fans pointing out other ‘new guard’ players that aren’t quite as experienced as Sid.

Where is Auston Matthews? He’s such a complete 2 way player.

This must be forwards only.. Victor Hedman is 100% the best all around player in the show with Crosby #2

Stick taps to @CentreBell (@CanadiensMTL), which continued its reputation for having the best ice to play on with its fourth time earning the nod in the #NHLPAPlayerPoll. pic.twitter.com/tRidPripXz

Fan reaction: Seeing as most NHL fans have not skated on NHL ice, let alone every NHL arena, there isn’t much reaction here. Bell Centre is, no question, one of the legendary barns in the league.

Hockey is montreal , simple as that , without the habs the NHL wouldn't exist today

7. Player you least like to play against – Brad Marchand

Hate to play against him – but would love to have him on their team. @bmarch63 (@NHLBruins) has a special mix of skill and grit that players would rather line up beside than compete against. #NHLPAPlayerPoll pic.twitter.com/dGPb8j3FnM

Fan reaction: An elite talent, an elite pest. We don’t even need to give the fan reaction, this one is just true.

Call her “Captain Clutch” and the best women’s hockey player around. @pou29 (@PWHPA, @HockeyCanada) has a reputation that precedes her, and the players admire her undeniable talent. #NHLPAPlayerPoll pic.twitter.com/hQnLO7N0DS

Fan reaction: No surprise here. Poulin constantly comes through in the clutch, and she plays with the grit and personality that hockey fans absolutely love. Captain Clutch takes the dub.

9. Best NHL road city to spend a day off in – Vegas

Life on the road can interfere with routine and it’s always hard to be away from family – but according to the players, an off-day in Las Vegas (@GoldenKnights) isn’t so bad. #NHLPAPlayerPoll pic.twitter.com/R1vPDD7apS

Fan reaction: Not much fan reaction, but we don’t doubt this to be true. Vegas is America’s playground, and it’s also the 2nd newest city to join the league. So much to do, so much to discover!

10. NHL player that could make it in another sport – Joe Pavelski (golf)

Safe to say @jpav8 has made it in the NHL, but according to the #NHLPAPlayerPoll, the @DallasStars forward could have made it in the world of golf, too! pic.twitter.com/JXBXCIFVzP

Fan reaction: No fan reaction here, either. It’s a tough one, guys.

When it comes to hockey hair, the players think @CodyEakin50’s (@BuffaloSabres) flow is the best in the league. #NHLPAPlayerPoll pic.twitter.com/TT5nBNoAkK

Fan reaction: Hard to argue with this. Eakin has some of the most unique lettuce in the league. Saying that, there were some other suggestions flowing in.

YES! El Camino gets the recognition it deserves

No way. It’s a mullet! AJF has killer flow! pic.twitter.com/6KPsOmzbST

He has 2 million followers between Twitter and Instagram – and you can likely find a few of his NHLPA peers among them.

The players have tabbed @PKSubban1 (@NJDevils) as the best player to follow on social media for a second time in the #NHLPAPlayerPoll! pic.twitter.com/7Jl01lhQsz

Fan reaction: Subban is easily one of the most active NHLers on social. For some, that’s a win, for others, it’s annoying. Either way, it’s hard to argue when NHL players socials are typically… shall we say… dry.

Honestly, never seen it as a good thing when a players brand gets bigger than the team he represents.. but that's just me...

Many young hockey fans and players idolize their favourite athletes on the ice, and according to the #NHLPAPlayerPoll, Sidney Crosby (@penguins) sets the best example for generations to follow. pic.twitter.com/RJJwwLJZba

Fan reaction: The poll wasn’t even close, with Sid clocking in at 42.7% and the next highest – Patrice Bergeron – coming in at 9.8%. The fan reaction was mostly fans just agreeing – Sid is the guy to look up to.

not sidney being in first and the gap between him and bergeron 😭😭😭 sid confirmed best 💞 https://t.co/CvhdZlOX5q

Everyday of the week!!!! https://t.co/HEkJZimxkM

14. Non-NHL player you would like to trade places with for a day – Tom Brady

Some of the sporting world’s greatest names make the cut of non-NHL athletes the players would most like to trade places with for a day, but legendary NFL star @TomBrady (@buccaneers) leads the pack. #NHLPAPlayerPoll pic.twitter.com/PzKWgfFlZZ

For some reason the NHLPA didn’t tweet this one out, but fans still reacted. Overall, it’s hard to argue with Ovi’s shot, but there was one other players that had fans talking.

It's close between Ovechkin and Matthews for me

Slapshot, yes, but I think Matthews has the better wrister.

There you have it, another poll in the books! Do you agree with the selections?