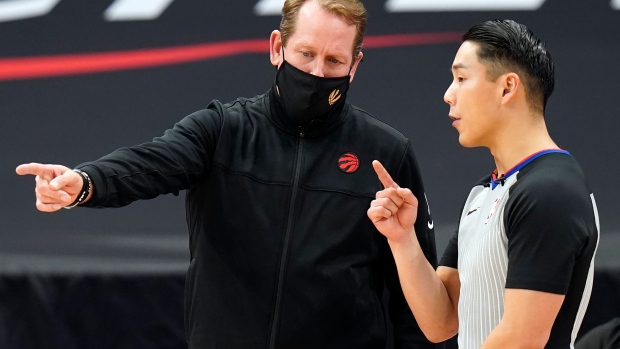 We got some surprising news on the Toronto Raptors coaching front late Sunday night, when the Minnesota Timberwolves made the unusual decision of replacing their head coach Ryan Saunders with an external hire midseason, signing Raptors assistant Chris Finch to a multi-year contract.

Finch only joined the Raptors in the offseason, meaning his tenure with the team falls short of a season, but he has an extensive history as one of the league’s top assistants as well as coaching alongside Nick Nurse in other basketball leagues before reaching the NBA. He was brought in this season to revamp the Raptors’ offense.

It’s extremely rare for another team to bypass an interim coach and hire a coach away from another team so suddenly during the season, but Finch’s reputation around the league is strong.

Now, suddenly, in just his third season as a NBA head coach, the Nick Nurse coaching tree is starting to form.

Hiring a coach off another staff during the season is uncommon, but Toronto wouldn't stand in the way of Finch's chance to become a head coach now. Finch had success as a G-League head coach, and has interviewed for several head coaching jobs in recent years.

Just back in October, Nurse’s top assistant Nate Bjorkgren was hired by the Indiana Pacers. Currently, the Pacers are a tick ahead of the Raptors in the standings, sitting 4th in the East with a 15-14 record.

Some of Nurse’s previous assistants have also gone on to take other more prominent roles, including Phil Handy with the Los Angeles Lakers and Patrick Mutombo as the Raptors 905 head coach.

The Raptors will have to adjust on the fly to the newest opening on their bench, but it’s a sign of good things that Nurse’s assistants continue to be in such hot demand. Remaining on his coaching staff include former 905 coach Jama Mahlalela, Spain national coach Sergio Scariolo and lead assistant Adrian Griffin.

Everyone likes to talk about the Gregg Popovich coaching tree, but at the rate that things are developing through the first few years of Nurse’s head coaching career, we better watch out.

If your an Assistant Coach in the NBA who’s trying get a Head coaching gig you might want to go work under Nick Nurse because he’s putting all of his people on. Real Talk.