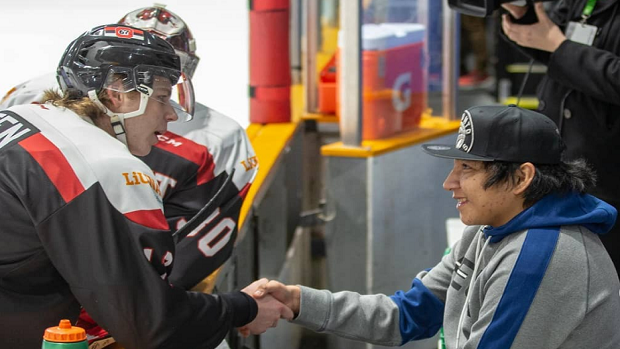 Special moment for a huge hockey fan. , via Instagram/@Ott67s

Sports are about a lot more than what takes place on the field, court, or ice.

They are an opportunity to create a community, a sense of belonging, and an escape from the harsh realities that some people face on a daily basis.

Tonight, when the Ottawa 67's were set to face the Kingston Frontenacs on a frigid January night, the OHL powerhouse warmly welcomed a very special guest.

It's more than a game.

Desmond is a @CHEOhospital patient who travels from Thunder Bay for treatment. When @FoundationOSEG learned he was a big hockey fan they invited him to tonight's game and the boys wanted to make this visit extra special.#67s #NoQuit pic.twitter.com/bYJeWY2cKz

Desmond is a youngster from Thunder Bay, Ontario, which is 1462 kilometers away from the nations capital, where he travels to receive treatment at CHEO Hospital Ottawa, a stand-alone pediatric health centre.

Desmond’s hometown is a die-hard hockey town, that has produced a considerable amount of pros for their population. The list includes the Staal brothers, Matt Murray, Mackenzie Blackwood, and Robert Bortuzzo, to name a few.

It’s no surprise, then, that Desmond is a huge hockey fan.

When the OSEG Foundation, which is a group committed to giving all children the opportunity to participate in sports, found this out, they invited him to the Ottawa 67’s game, and the team was quick to jump on the opportunity to give him the royal treatment, letting him sit on the bench for warm ups, and providing him with a signed jersey.

It's more than a game. Desmond is a CHEO patient who travels from Thunder Bay for treatment. When the OSEG Foundation learned he was a big hockey fan they invited him to tonight's game and the boys wanted to make this visit extra special. . . 📸 @vwutti . . #Ottawa #67s #Ottawa67s #MyOttawa #OttCity #613 #YOW #OHL #CHL #juniorhockey #OttawaHockey #OttawaEvents #TDPlace #LansdowneLive #Lansdowne #NoQuit

The 67’s have made it obvious that they’re great people on the ice, but they’re also raising a lot of eyebrows off the ice this year. They sit at first in the Eastern Conference with a comfortable margin, and are tied with the London Knights for first overall in the league. They added the starpower of the nation’s sweetheart Mikey DiPietro between the pipes, as well as some notable goal-scorers, and are anticipated to make a great playoff run.

Judging from the character they showed tonight, they deserve it.