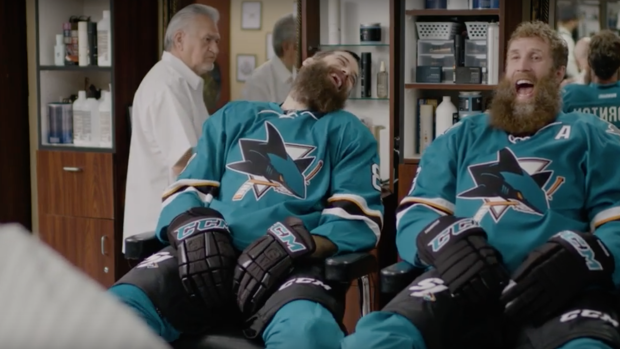 The San Jose Sharks are one of the best teams in hockey again this season, and they easily have the best beards in the NHL on their team, courtesy of Brent Burns and Joe Thornton.

Jumbo and @Burnzie88 are legitimately talking about how they take care of their beards. #WCH2016 pic.twitter.com/oWRupeLOie

The two are, and forever will be beard brothers for life, and both guys are hilarious to say the least.

If that legendary picture doesn't prove that fact, then maybe this amazing barber shop commercial they recently starred in might.

As funny as the actual commercial was, the outtakes for it were even better.  We dare you to try and watch them without laughing.

Teams around the league probably wish dealing with Burns and Thornton on the ice would be as fun as dealing with them in a barber shop, but that is not the case at all.

On the ice, it's all business, and the bearded brothers are first (Burns) and fourth (Thornton) on the Sharks in points this season.