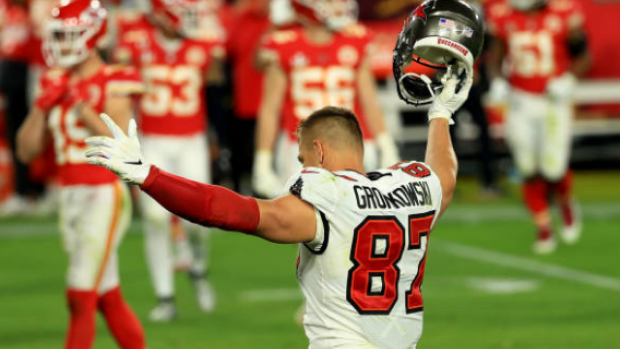 The Tampa Bay Buccaneers are NFL champs, and the classic Tom Brady/Rob Gronkowski connection had a lot to do with it. The two became the all-time leader in quarterback/receiver touchdowns in the Super Bowl, connecting for their 13th and 14th on Sunday.

The only difference this year, it was for a brand new team.

The duo spent their entire careers with the New England Patriots before making their way to Tampa Bay in the off-season. Now that they are once again champs, this time for the Bucs, the Pats had a special couple message to send to their two former stars. The messages were vastly different from one another.

Congratulations to the greatest of all time.

And Gronk, be careful with that trophy...

If you don’t understand the reference, we’ll jog your memory. After winning his third Lombardi Trophy, Gronk essentially used it to lay a sacrifice bunt.

.@RobGronkowski left a mark on this organization.

And on the sixth Lombardi. pic.twitter.com/t5IVTyCXcA

We’re going to need a trophy handler to watch over Gronk with the Lombardi.