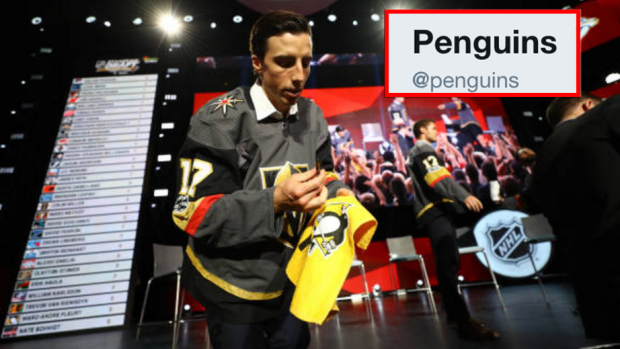 Wednesday night at the NHL awards, Marc-Andre Fleury's career as a Penguin officially came to a close.

The Vegas Golden Knights selected Fleury to be their guy between the pipes and it was a very emotional moment for the Penguins and their fans.

No one is more upset about Marc-Andre #Fleury joining the #GoldenKnights than Evgeni #Malkin. . #Repost: @e.malkin71geno sad day (((

Fan screams out "I love you" to Fleury. He stops mid-sentence and says, "I love you too."

Sid on Fleury: "He's going to be so important for their team w/ his experience & the kind of person he is. You couldn't have a better guy."

penguins fans trying to keep flower on the team pic.twitter.com/rJA6uJE2tP

After he was selected by the Golden Knights, the Pens honoured him in a couple of ways on Twitter.

The first was a tribute video and the second was a subtle change to the team's Twitter name.

Let the crying continue. Here's a quick look at Sid and Flower hugging it out. pic.twitter.com/AXClpEutJ5

Stick tap to the Penguins for honouring their former franchise-altering goalie.

Coincidentally, 14-years ago on June 21st, Fleury was drafted by Pittsburgh, so it's only appropriate that on the same day he would be selected by Vegas, a new team hoping for immediate success.

Exactly 14yrs ago today we drafted him.
Since then: 3 Cups, 437 wins and many many smiles.
Best of luck you beautiful human.
Merci, Fleury🌹 pic.twitter.com/sBJgDiu0Hm

When the NHL schedule gets released on Thursday, every Penguins fan will probably circle the game the Golden Knights come to town because we imagine the team will have something very special planned for Fleury that night, too.