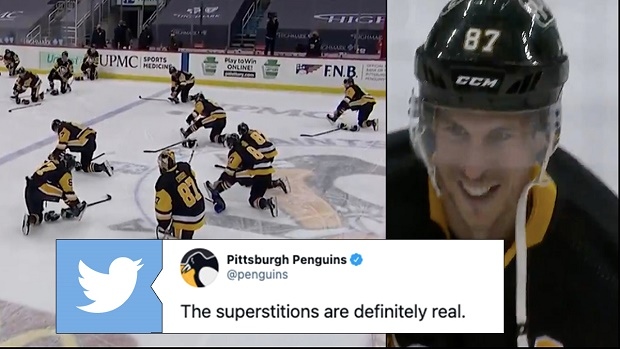 Sidney Crosby has helped bring a lot of success to the Pittsburgh Penguins franchise, so when the captain suited up for his 1,000th NHL regular season game on Saturday night they made sure to go all out for the guy who has given everything to the city since day one.

One of the early tributes on the night game during the pre-game warm-up, as every player who took the ice for the skate hit the ice in a No. 87 Sidney Crosby jersey instead of their own.

Paying their respects to their captain.

But since the players were looking the part they had to act the part, too, and that meant copying Sid’s pre-game warm-up routine.

The superstitions are definitely real. pic.twitter.com/GekmGff5iO

Just so everyone knows, Sid appreciated it too. pic.twitter.com/c6ctwQvo7F

A night to remember 💛🖤 pic.twitter.com/os2YBNDrxe

I want more goals for you, more points, more games... And of course, more Cups.

We want that too, Geno.

This one will hit you right in the feels ⬇️ pic.twitter.com/iUM2Fwx0t5

He’s been a treat to watch every year he’s been in the league, even if he’s caused your team’s fan base a lot of pain over the years. Let’s just be happy we’re getting to witness one of the best to ever play the game do his thing on a nightly basis.