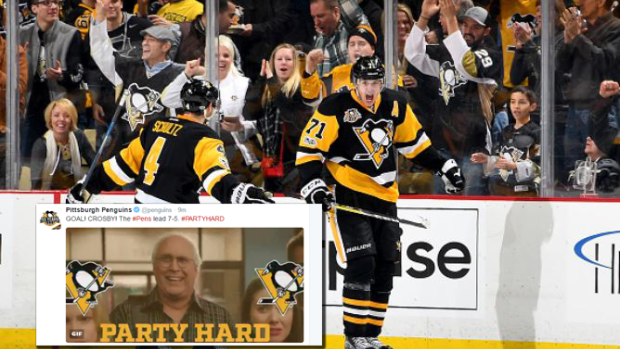 Whatever speech Mike Sullivan and Barry Trotz gave to their players during the first intermission on Monday clearly got everyone fired up.

At the start of the second period on Monday, the Capitals lead the Penguins 2-0. By the time the second period was over, nine goals had been scored and the score was 6-5. For those scoring at home, yes the Penguins scored six goals in a single period, including a hat-trick from Evgeni Malkin. After the wild period, the Penguins shared a tweet showing just how many Pens players got involved in the scoring flurry.

Those kind of numbers would even be considered absurd for an All-Star game. Crosby completed the Penguins touchdown, notching Pittsburgh's seventh goal in the third period.

The most surprising stat of all so far though has to be that in a game where the red lamp has gone off 12 times, Alexander Ovechkin hasn't scored once.

Update: It's 7-7 and Ovi still doesn't have a goal somehow.