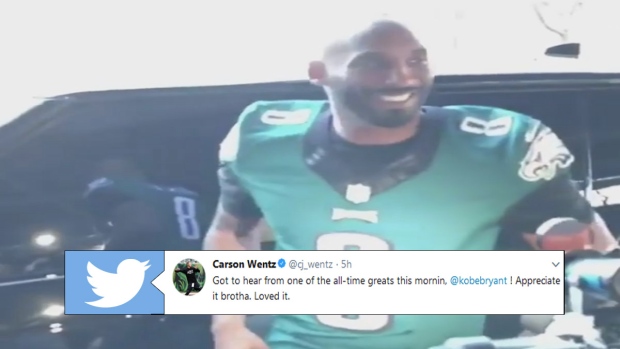 Kobe Bryant will always have a special bond with Los Angeles, but when the Philadelphia Eagles come to town it’s hard for him to turn his back on his hometown team.

The Eagles have been practicing at Angel Stadium in Anaheim all week long in preparation of their tilt with the Los Angeles Rams on Sunday afternoon.

On Friday, the team took part in their last practice of the week, and they got a special visit from the Lakers legend.

Bryant spoke to the team ahead of their practice on Friday morning and it looks like a lot of the players have the Mamba Mentality now.

.@greengoblin explains what @kobebryant’s message to the team was this morning. pic.twitter.com/lQ0VLKDS1n

Got to hear from one of the all-time greats this mornin, @kobebryant ! Appreciate it brotha. Loved it.

NBC’s John Clark caught up Bryant after the Lakers legend met with the Eagles players and Bryant shared some of the messages of passed along to the team during their time together.

“I get nervous before every game”

“I think the character of this team is special. And thats what wins championships...
Fingers crossed🤞🏾”

Bryant also received his own custom official Eagles jersey from the team and he looked pretty sharp in the Eagles green.

#Eagles fan #KobeBryant spoke to the team Friday in a custom Kobe jersey 🔥 . (Video via JClarkNBCS/Twitter)