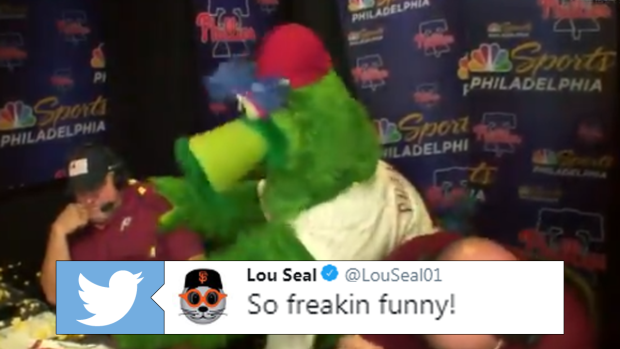 The role of a mascot is to entertain by any means necessary. We see them pranking opposing players, we see them dancing in ridiculous fashion, we see… Gritty. They’re there to make people laugh while prove their undying fandom to the team.

Sometimes they may go too far, however. The Phillie Phanatic, who has been known to go too far before despite his beloved reputation, may have overstepped a tad in the broadcast booth. He appeared to actually irritate broadcaster John Kruk.

Yooooo, John Kruk is FED UP with the Phanatic. 😂 pic.twitter.com/yCayd7L8y0

To be fair, it would be pretty annoying to have your workspace suddenly covered in buttery popcorn. Fans were quick to notice the irritation, and they didn’t hold back their entertainment by it.